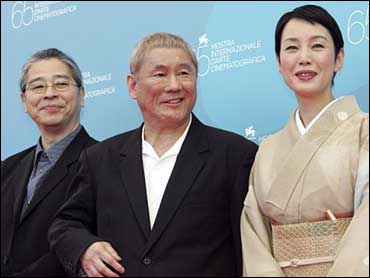 Japanese filmmaker Takeshi Kitano presents a portrait of an artist who sacrifices his family and nearly his own life in the pursuit of art in his new film "Achilles and the Tortoise," making its premiere Thursday at the Venice Film Festival.

Kitano said that while he set out to make a film about "cruel art," he didn't think an artist need make the sacrifices depicted in the movie.

"What I was trying to describe was a side effect of art and art as a kind of drug that numbs your senses," said Kitano. "Art might become a drug for an artist. But I am not convinced that it is necessary for all artists."

The first half of the film describes the pampered boyhood of the artist Machisu - a name chosen by Kitano because of its similarity in Japanese to the impressionist Matisse. The boy is indulged by his parents, teachers and neighbors as he disappears into his drawing and painting - until his father's suicide after his business fails.

Death shadows Machisu as he is shunted off to an unwilling uncle - his mother commits suicide herself, and a village idiot who is equally obsessive about art is killed - and then onward to his young adulthood where the pursuit of art claims two of his friends. As he seeks success, he loses his childhood joy and freedom of painting, churning out cheap imitations of masters as he tries to follow the advice of an art dealer.

The extremes he goes to in the pursuit of art escalate. In one scene, he covers the face of his just-deceased daughter, whom he has always neglected, with lipstick and then tries to make an imprint of it on a handkerchief.

Kitano, who is also a comedian and TV presenter in Japan, has developed a strong art house following abroad, especially in Europe, though Japanese audiences have been a little slower to warm up.

"I would say that in Japan my movies are not extremely successful," Kitano said. "I haven't had great economic success in Japan - but I am not going bankrupt. If my bank balance were in a deficit I wouldn't be able to continue to make movies."

The canvases that Machisu churns out throughout the film are Kitano's own - many that had been given as gifts to friends over the years and then reclaimed for the filming. Kitano said some would be sold by lottery in Japan.

"Achilles" is among the 21 films competing for the coveted Golden Lion. But Kitano - who has already won a Golden Lion in 1997 for "Hana-bi" ("Fireworks") and a runner-up Silver Lion in 2003 for "Zato-ichi" - said he was just happy to have been chosen.

"In Japan they are convinced that they take any movie in Venice," he joked, "but there are so many who don't admit that they sent works and were rejected."