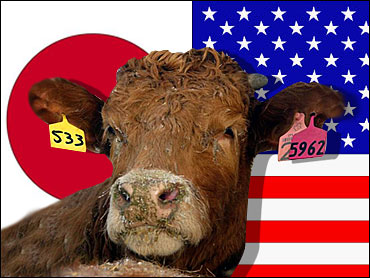 Japan's food commission declared beef from young American cattle safe on Thursday, paving the way for the government to ease a two-year import ban and resolve a bitter trade tiff with its top ally.

The Food Safety Commission voted unanimously to send the report to the Health and Agriculture ministries, which will study it and make a final recommendation to the government. Media reports say the ban could be eased as soon as next Monday.

A resumption of imports — to be limited to meat from cows younger than 21 months — would defuse a dispute that has nagged the two allies since Japan closed its doors to American beef in December 2003 after the first U.S. case of mad cow disease.

Commission members, however, said that the safety of American beef would depend on U.S. inspectors following strict guidelines, such as removing dangerous cow material such as brains and spinal cords from the meat.

"Much of it is dependent on a promise between two countries," said Commission Chairman Masaaki Terada.

Both the Asahi and Nikkei newspaper said Wednesday that U.S. beef could reach Japanese consumers before the year's end if the ban is speedily removed.

Prior to the ban, Japan was the most lucrative overseas market for U.S. beef, buying $1.4 billion worth in 2003. Cheap, tasty American beef had been especially popular in low-cost beef-and-rice restaurants.

Approval by the Food Safety Commission brings a lengthy process one step closer to completion.

Japan has tested every domestic cow since its first case of mad cow disease in 2002, and initially demanded that the United States do the same. Japan has found 20 domestic cases of the disease so far.

U.S. authorities, however, balked at the cost of testing the huge American herd and argued that it was not scientifically necessary.

After lengthy negotiations, the two sides decided to allow the resumption of imports of beef from younger cows, though U.S. officials have grumbled that tests show cows under 30 months are free from infection.

The food commission's deliberations have been painstaking. After a commission internal panel concluded U.S. beef from younger cows posed no significant danger, the commission held a series of public meetings on the report around the country.

Yasuhiro Yoshikawa, head of a commission panel working on the mad cow issue, said that more than 50 percent of the comments collected in the hearings were against resumption of imports. Still, he defended the commission's findings.

"The issues raised in the public hearings were all adequately debated within the prion research committee," he said. "I believe that as specialists, we took enough time to analyze these issues."

Under the eased guidelines, some 5 million American cows and 700,000 Canadian cows can be certified to be young enough to be imported, commission officials said.

The move comes after a series of American officials — including Secretary of State Condoleezza Rice — expressed growing impatience with the slow progress resolving the dispute. The issue came up when President George W. Bush visited last month.

A group of 21 U.S. senators introduced legislation on Oct. 26 that would force Bush to impose tariffs on Japan if it does not lift the ban.

But even if the ban is eased, it is uncertain when finicky Japanese consumers will be ready to dig into American steaks.

A survey this week by Kyodo News agency showed some 75 percent of respondents said they would be unwilling to eat U.S. beef because of mad cow fears, compared to 21.2 percent who said they would consume it.

Eating beef from cattle infected with mad cow disease, or bovine spongiform encephalopathy, can cause a fatal brain disorder in humans.