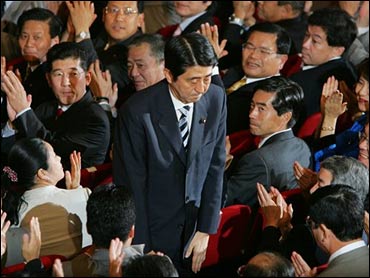 Nationalist candidate Shinzo Abe won the race for Japan's ruling party leader on Wednesday, all but clinching election next week as prime minister and pledging to make his country a more robust force on the world stage.

The son of a foreign minister and grandson of a prime minister, Abe trounced his two opponents, winning 464 of the 702 votes counted in the Liberal Democratic Party election.

The youthful conservative - he turns 52 on Thursday - immediately vowed to push ahead with economic reforms, make Tokyo a world leader, strengthen the prime minister's office and keep Japan in the international fight against terrorism.

"I want to make Japan a country that is trusted and loved by the countries of the world, and one that asserts leadership," Abe, currently chief Cabinet secretary, declared after his victory.

Abe, who favors a hard line against North Korea and tighter military cooperation with top ally the United States, won a three-year term as LDP president. The ruling coalition-dominated Parliament votes for prime minister next Tuesday.

If elected next week, Abe would be Japan's youngest postwar prime minister and the first born after World War II. He is relatively inexperienced, having joined Parliament in 1993 and assumed his first Cabinet position only a year ago.

Abe campaigned on forging a more confident Japan. He said he would seek to revise the pacifist Constitution to give the military more freedom of action, promote patriotism in the schools, and distance Tokyo from its post-1945 war guilt.

"He's from the generation that doesn't know war," said Takashi Sasagawa, an LDP lawmaker. "Not knowing war is his strength, because he can be on equal terms with other countries."

Despite his inexperience, Abe came to the vote with key essentials for victory: high support ratings inside and outside the party and the blessing of his mentor, Prime Minister Junichiro Koizumi, who remains widely popular after five years in office.

"From now on, I would like to join everyone in helping Mr. Abe win the public trust," Koizumi said minutes after the vote.

One looming question for Japan's neighbors is how far Abe will push his vision of a country freed from the restraining legacy of World War II, in which Tokyo's attempt at regional dominance left Japan and much of Asia in ruins.

Abe, for instance, supports revisionist history textbooks that teach students to take pride in their nation rather than focus on the dark accounts of Japanese atrocities and aggression. He is also a proponent of the Yasukuni war shrine, which honors war criminals among the country's war dead.

He has compounded this conservative image by questioning whether every prime minister must repeat Japan's standard apology for its wartime actions. When North Korea tested several missiles in July, Abe suggested a look into whether the Constitution would allow Japan to conduct a pre-emptive military strike.

Japanese pacifists say Abe's attitudes border on the dangerous. But for supporters, he represents a Japan that can stand up to other nations after decades of turning the other cheek.

"He thinks seriously about Japan's national interests," said Ryohei Saito, 65, who visited the Yasukuni war shrine on Thursday. "Japan has been too weak till now, so we need to be more assertive. I think Abe can build a strong Japan."

After the vote, Abe said his top priorities for the next parliamentary session would be education reform and extending Japan's anti-terrorism law, which allows Japan to assist U.S.-led coalition forces in the Indian Ocean.

It was unclear how his approach would affect Japan's troubled relations with China and South Korea, two victims of Japanese aggression that have refused to meet with Koizumi because of his visits to the Tokyo war shrine.

If he becomes prime minister, Abe will take the helm of a Japan in transition.

After five years under Koizumi, reforms have made Japan a more competitive market, powering the economy out of a decade-long slowdown but also widening an increasingly troubling gap between rich and poor.

On Wednesday, Abe said he would keep the flame of change alive.

"I will vigorously bring reform forward. We must not, at any cost, stop reforming," he told reporters after the vote. "We must speed up reforms."