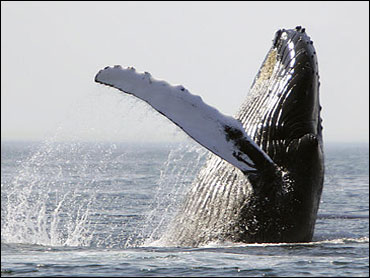 Japan has suspended its first humpback whale hunt in seas off Antarctica since the 1960s, the government said Friday, backing down in an escalating international battle over the expansion of its hunt.

Japan dropped the planned taking of 50 humpbacks - which have been off-limits to commercial hunting since 1966 - at the behest of the United States, the chair of the International Whaling Commission, said Chief Cabinet Secretary Nobutaka Machimura.

"The government has decided to suspend hunts of humpback whales while talks to normalize IWC is taking place," Machimura said, adding the suspension would last a year or two. "But there will be no changes to our stance on our research whaling itself."

Japan dispatched its whaling fleet last month to the southern Pacific in the first major hunt of humpback whales since the 1960s, generating widespread criticism. Japanese whaling officials said Friday they had not harpooned any humpbacks yet.

The move defuses for now a high-profile row with Australia, though Japanese officials deny they were influenced by Canberra's anti-whaling position. Australia announced Wednesday it would dispatch surveillance planes and a ship to gather evidence for a possible international legal challenge to the hunt.

It was unlikely, however, to quell the increasingly bold high-seas protests against Japan's scientific whaling research program, under which it kills a total of 1,000 whales - mostly minkes - a year in the Pacific.

Japan has wrestled with the IWC for years to overturn its 1986 moratorium on commercial whaling, and recently has called for a "normalization" of the group to return to its original mission of managing sea resources, rather than banning whaling.

The decision followed talks between Japan and the U.S. over the state of the IWC, said Hideki Moronuki, chief of the Fisheries Agency's whaling division. The State Department had warned Japan that some anti-whaling nations could boycott IWC meetings, he said.

"That goes against the intentions of Japan, which have sought a normalized IWC," said Moronuki, who has been an energetic and outspoken proponent of Japan's whaling program.

Commercial hunts of humpbacks - which were nearly harpooned to extinction in the 20th century - were banned in the Southern Pacific in 1963, and that ban was extended worldwide in 1966.

The American Cetacean Society estimates the humpback population has recovered to about 30,000-40,000 - about a third of the number before modern whaling. The species is listed as "vulnerable" by the World Conservation Union.

The decision was cheered by anti-whaling nations - with reservations.

"While this is a welcome move, the Australian government strongly believes that there is no credible justification for the hunting of any whales," Australian Foreign Minister Stephen Smith said, adding it would continue with its surveillance plans.

Karli Thomas, who is leading a Greenpeace expedition heading to the southern Pacific, also lauded the development.

"This is good news indeed, but it must be the first step towards ending all whaling in the Southern Ocean, not just one species for one season," Thomas said in a statement from on board the group's ship, Esperanza.

Coastal communities in Japan have hunted whales for centuries, but whale meat was not eaten widely here until the U.S. occupation when officials encouraged its consumption in the poverty stricken years after World War II.

Despite the commercial hunting ban, Japan is permitted under the IWC rules to kill whales for scientific research. The meat is sold under the program and often ends up as pricey items in specialty restaurants, though its popularity as a staple has plummeted with the availability of beef and other meats.

Despite the suspension of the humpback hunt, Japan still plans to take as many as 935 minke whales and up to 50 fin whales in the Antarctic in what the Fisheries Agency says is its largest-ever scientific whale hunt.

Japan also takes more minkes in the northern Pacific later in the year.

Critics, however, say the scientific program is a ruse for Japan to keep its whaling industry alive until it can overturn the commercial ban. Protesters in boats earlier this year dogged the Japanese fleet, which eventually had to cut the hunt short when a fire damaged one of its ships.