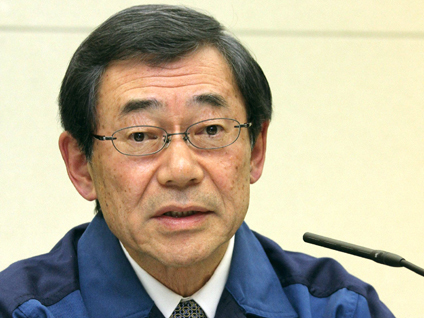 TOKYO - The utility behind the world's worst nuclear disaster since Chernobyl is almost certain to report massive losses Friday, as expectations grow for its president to step down in disgrace.

It is common for executives at major Japanese companies to resign for even smaller scandals and other fiascos. It has been almost taken for granted here that Shimizu would eventually have to resign.

Three reactors at Fukushima Dai-ichi went into meltdown after a March 11 earthquake triggered a tsunami that destroyed the plant's cooling systems. Efforts to stop leaking radiation and get the reactors under control have been a perilous struggle and are expected to continue into next year.

TEPCO had a profit of nearly 134 billion yen the previous fiscal year.

Overall losses from the disaster are expected to be far bigger, including compensation for the thousands of people forced to evacuate from their homes around Fukushima Dai-ichi, and businesses such as farms that say products were damaged by radiation.

TEPCO must also shoulder the costs of resolving the problems at the reactors, as well as restarting other kinds of power plants, which aren't nuclear, to make up for the electricity shortfall.

The government has been studying possible bailouts, including using contributions from other utilities and taxpayer money to help TEPCO deal with the towering costs.

Officials told reporters repeatedly the fuel cores at the damaged plant were relatively intact despite explosions at four reactors. Only recently, did they acknowledge the meltdowns.

Power shortages are another challenge for the world's third largest economy besides the destruction over stretches of its Pacific coast. The March disasters have left 24,000 people dead or missing.

Japanese automakers said Thursday they will produce vehicles over the weekend and take Thursday and Friday off to even out power use during the peak months of July, August and September to avert blackouts.

The Japanese economy shrank at a worse-than-expected annualized rate of 3.7 percent from January-March, marking the second straight quarter of negative growth, as factory production and exports plunged, according to government data released Thursday.