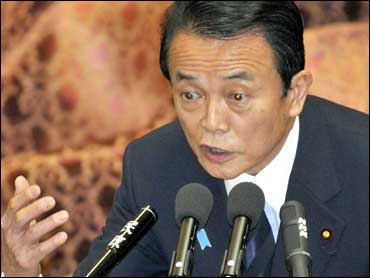 Japan could impose more sanctions on North Korea if it goes ahead with a planned rocket launch next month, regardless of its payload, and plans to raise the issue with the U.N. Security Council, government officials said Thursday.

"We will make a comprehensive decision, including the possibility of imposing tougher sanctions," Prime Minister Taro Aso told a parliamentary committee. He was responding to growing calls from lawmakers in his ruling Liberal Democratic Party to punish the North if it goes ahead with the launch, scheduled for between April 4-8.

North Korea says it intends to launch a rocket to put a telecommunications satellite into orbit, but many fear it could be used to test ballistic missile technology and have demanded it be stopped. The North is barred by U.N. sanctions from testing ballistic missiles.

Foreign Minister Hirofumi Nakasone said Japan considers any launch, even if the payload is a satellite, as a missile test. North Korea has indicated that the rocket would be launched in an easterly direction, taking it over Japan and the Pacific Ocean.

"Obviously, it is our country that faces the most serious threat," Nakasone said. "We plan to take a leadership role so that the entire international community will join in solid action to support sanctions."

Members of the ruling party's committee on North Korea are calling for sanctions that include an extension of ongoing economic restrictions from six months to one year, a total export ban and tougher restrictions on money transfers to the North.

Japan imposed tight trade sanctions against Pyongyang in 2006 after it tested ballistic missiles in waters between the two countries and conducted an atomic test. Japan's current sanctions, which have been extended every six months since, are set to expire on April 13.

Chief Cabinet Secretary Takeo Kawamura said that if the launch fails, fragments of the rocket could drop on Japan. He reiterated Tokyo's threat to shoot down any objects that might harm lives or property.

"We must protect the people's lives and assets and we're preparing for any development," he said.