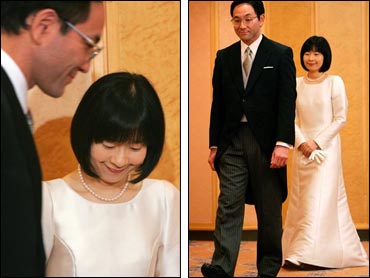 Wearing a simple white wedding dress and pearls, Japan's Princess Sayako bid farewell to palace life Tuesday to wed a Tokyo city employee in a low-key ceremony marking the first time that an emperor's daughter has married a commoner.

Thousands of well-wishers cheered the 36-year-old Sayako as she was driven out of the gates of the palace to the elegant Imperial Hotel, where she married Yoshiki Kuroda in a wedding that was austere by royal standards.

Under Japanese law, Sayako, the daughter of Emperor Akihito and Empress Michiko, lost her royal status by marrying and will now live the life of a taxpaying commoner, without her generous palace allowance.

To prepare for the dramatic shift to commoner status, Sayako has taken driving lessons and practiced shopping at supermarkets.

Sayako referred to the radical change in her life in a statement released after the ceremony, in which she said that Akihito told her that their family ties would remain unchanged, and urged her to respect her husband and his work

"The empress then hugged me tightly and told me `Everything's going to be OK,' many times," Sayako said in the statement.

In a brief conference with reporters, she referred to the uncertainties of the future.

"The Emperor told me to continue to polish the virtues I have gained in my life so far. There are many things I still do not know about my life ahead, so I'm not sure how exactly to follow these instructions," she said.

"But I feel very happy that the Emperor regards my new life as a continuation, not as a complete break," Sayako added.

Sayako and Kuroda were childhood acquaintances, but their romance began two years ago at a tennis party thrown by Prince Akishino, one of Sayako's brothers.

Palace officials registered the marriage at a government office on their behalf during the wedding, officially making the princess Sayako Kuroda, the agency said.

The Shinto-style ritual, performed by the chief priest of Ise Shrine in central Japan, considered the nation's most sacred shrine, was attended by 31 people, including the emperor and the empress, it said.

If there's a honeymoon trip, it's a secret from the public. The official schedule said only that the newlyweds planned to have dinner at their hotel and then go straight to their new home.

The wedding took place as the government is considering changing the 1947 law that forbids women from ascending to the Chrysanthemum Throne. The same law requires female royals to leave the palace upon marriage.

Japan's royal family has not had a male baby since the 1960s, and there is no direct male heir to the throne. Sayako's brother, Crown Prince Naruhito, and his wife, Princess Masako, have one child, a 3-year-old daughter, Aiko.

With opinion polls showing widespread support for letting women reign, Japan is now on the verge of reverting back to the pre-1947 system that allowed eight women to assume the throne over the past 1,500 years.