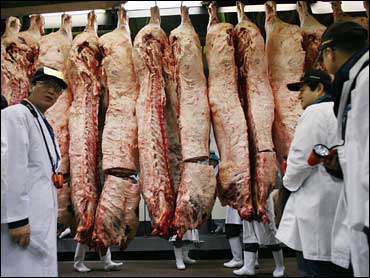 Japan on Thursday announced the resumption of U.S. beef imports, ending a ban imposed in January due to concerns about mad cow disease that had strained ties with Washington.

U.S. Ambassador Thomas Schieffer immediately welcomed the move, which reopens Japan's lucrative market to a select list of American meat exporters, saying that it resolved an issue of primary importance to the United States.

"We are pleased that Japanese auditors and officials have found our process to be sound, and we are proud that our system is scientifically based and exceeds international standards," Schieffer said in a statement.

The ban was imposed when Japanese inspectors checking a veal shipment found banned parts believed to be at risk for the disease. It was lifted after Japanese representatives toured U.S. facilities to ensure they met safety guidelines.

U.S. beef imports were initially blocked by Japan in December 2003 over concerns about possible mad cow disease among U.S. cattle. The ban was lifted late last year, only to be reimposed in January.

In 2003, Japan bought about $1.4 billion worth of U.S. beef. Some American senators had threatened sanctions unless imports were restarted within weeks.

Health Minister Jiro Kawasaki announced the lifting of the ban after the Agriculture Ministry's mad cow advisory committee approved a resumption in imports.

"We think it is possible to guarantee safety so long as the U.S. observes its export program to Japan," Kawasaki told reporters. "We strongly hope that the U.S. will ensure compliance with the export program."

Japanese inspectors on Sunday returned from a month-long tour of 35 facilities in the United States to evaluate whether they comply with safeguards against mad cow disease. Japan requested the tour in June as a condition for its agreement in principle to resume imports.

Kawasaki said the inspectors found no problems at 20 of the 35 facilities. Thirteen of the 15 facilities with problems had made sufficient improvements by Thursday to be eligible for export to Japan, he said.

Of the remaining pair, one facility will be kept under close surveillance while the other's exports will not be allowed in Japan, he said.

The Health Ministry will also monitor how well the U.S. observes its export verification program over the next six months, according to a ministry statement. There are no plans to add more facilities to the list of those approved for export to Japan, it said.

Under an agreement between the countries, all U.S. beef shipped to Japan must come from cattle less than 20 months old, and no brain or spinal material can be included because the disease can be carried in that tissue.

Shipments from the 34 approved plants are likely to arrive in Japan in two weeks if shipped by sea, according to Kyodo News agency.