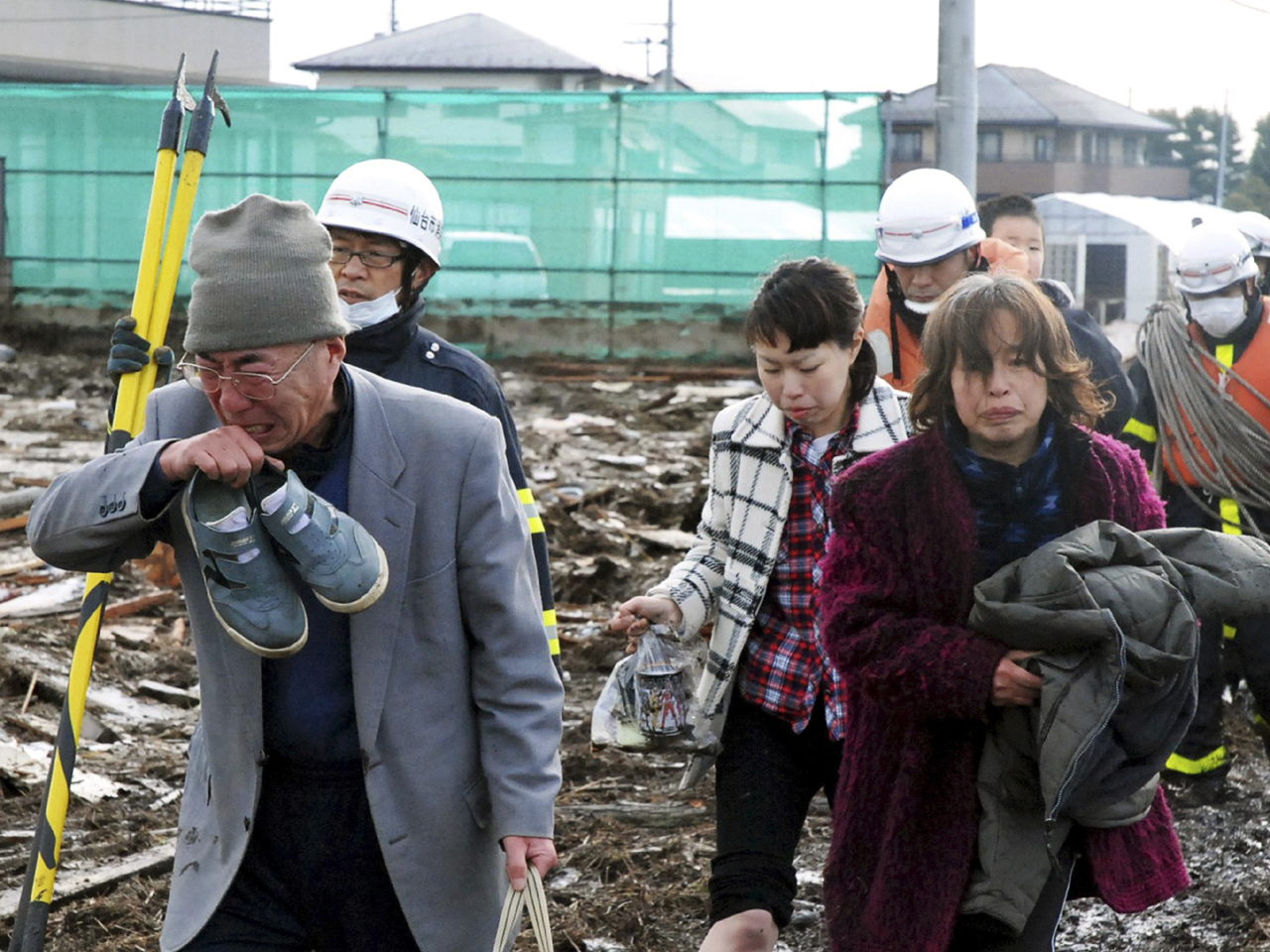 Millions of Japanese were without drinking water, electricity or proper food Sunday, two days after a powerful earthquake and tsunami hammered the northeastern coast, killing at least 1,400 people.

Police in Japan's northeastern Miyagi prefecture warned, however, that the death toll in that hard-hit area alone would likely exceed 10,000.

Prime Minister Naoto Kan appealed to the nation to unite in overcoming what he says is their worst crisis since World War II.

Kan said Sunday in a television address that the country's future will be decided by the choices made by each Japanese, and urged all to join in their determination to rebuild the nation following a massive earthquake and tsunami.

Miyagi police spokesman Go Sugawara said Sunday that the prefecture's police chief told a gathering of disaster relief officials that his estimate for deaths in the prefecture was more than 10,000.

There were only 400 officially confirmed deaths in Miyagi when the spokesman gave the dire prediction.

Although the government doubled the number of soldiers deployed in the aid effort to 100,000, it seemed overwhelmed by what's turning out to be a triple disaster. Friday's quake and tsunami damaged two nuclear reactors at a power plant on the coast, and at least one of them appeared to be going through a "partial" meltdown, raising fears of a radiation leak.

"First I was worried about the quake, now I'm worried about radiation. I live near the plants, so I came here to find out if I'm OK. I tested negative, but I don't know what to do next," said Kenji Koshiba, a construction worker at an emergency center in Koriyama.

According to officials, at least 1,400 people were killed -- including 200 bodies found Sunday along the coast -- and more than 1,000 were missing in the earthquake and the ensuing tsunami that hit with breathtaking force and speed, sweeping away everything in its path. Approximately 1,700 were reported injured.

Precise death tolls varied depending on the Japanese agency quoting the figures, but the national police released a statement saying 1217 people were confirmed dead and 1086 more were missing.

The U.S. Geological Survey calculated the quake to have a magnitude of 8.9, while Japanese officials raised their estimate on Sunday to 9.0. Either way, it is the strongest quake ever recorded in Japan.

Teams searched for the missing along hundreds of miles of the Japanese coast, and thousands of hungry survivors huddled in darkened emergency centers that were cut off from rescuers and aid. At least 1.4 million households had gone without water since the quake struck and some 2.5 million households were without electricity.

Temperatures were to dip near freezing overnight, but the prime minister warned that electricity would not be restored for days.

Trade Minister Banri Kaeda said the region was likely to face further blackouts and that power would be rationed to ensure supplies go to essential needs.

The government said it has sent 120,000 blankets, 120,000 bottles of water and 110,000 liters of gasoline in addition to bread, rice balls, instant cup noodles and diapers to the affected areas.

Large areas of the countryside were surrounded by water and unreachable. Fuel stations were closed and people were running out of gasoline for their cars.

PHOTOS: Japan quake from above, before and after
On the road to Sendai, Japan's Ground Zero

Public broadcaster NHK said around 380,000 people have been evacuated to emergency shelters, many of them without power.

In Iwaki town, residents were leaving due to concerns there over dwindling food and fuel supplies. The town had no electricity and all stores were closed. Local police had taken in about 90 people and given them blankets and rice balls but there was no sign of government or military aid trucks.

In the small town of Tagajo, near the hard-hit port city of Sendai, dazed residents roamed streets cluttered with smashed cars, broken homes and twisted metal.

Residents said the water surged in and quickly rose higher than the first floor of buildings. At Sengen General Hospital the staff worked feverishly to haul bedridden patients up the stairs one at a time. With the halls now dark, those that can leave have gone to the local community center.

"There is still no water or power, and we've got some very sick people in here," said hospital official Ikuro Matsumoto.

One older neighborhood sits on low ground near a canal. The tsunami came in from the canal side and blasted through the frail wooden houses, coating the interiors with a thick layer of mud and spilling their contents out into the street on the other side.

"It's been two days, and all I've been given so far is a piece of bread and a rice ball," says Masashi Imai, 56.

Police cars drove slowly through the town and warned residents through loudspeakers to seek higher ground, but most simply stood by and watched them pass.

Dozens of countries have offered assistance. Two U.S. aircraft carrier groups were off Japan's coast and ready to provide assistance. Helicopters were flying from one of the carriers, the USS Ronald Reagan, delivering food and water in Miyagi.

Two other U.S. rescue teams of 72 personnel each and rescue dogs were scheduled to arrive later Sunday, as was a five-dog team from Singapore and a 102-member South Korean team.

In Fukushima prefecture, people said the city of Soma was hardest hit. Rubble was all that remained of one coastal housing district where some 2,000 people lived. Their houses were simply washed away.

No signs of life remained Sunday night, except for the occasional dog searching for its owner. The only lights in town came from the fire engines patrolling the area.

In Sendai, firefighters with wooden picks dug through a devastated neighborhood. One of them yelled: "A corpse." Inside a house, he had found the body of a gray-haired woman under a blanket.

A few minutes later, the firefighters spotted another - that of a man in a black fleece jacket and pants, crumpled in a partial fetal position at the bottom of a wooden stairwell. From outside, the house seemed almost untouched, two cracks in the white walls the only signs of damage.

The man's neighbor, 24-year-old Ayumi Osuga, dug through the completely destroyed remains of her own house, her white mittens covered by dark mud.

Osuga said she had been playing origami, the Japanese art of folding paper into figures, with her three children when the quake stuck. She recalled her husband's shouted warning from outside: "'GET OUT OF THERE NOW!'"

She gathered her children - aged 2 to 6 - and fled in her car to higher ground with her husband. They spent the night huddled in a hilltop home belonging to her husband's family about 12 miles away.

"My family, my children. We are lucky to be alive," she told The Associated Press.

"I have come to realize what is important in life," Osuga said, nervously flicking ashes from a cigarette onto the rubble at her feet as a giant column of black smoke billowed in the distance.