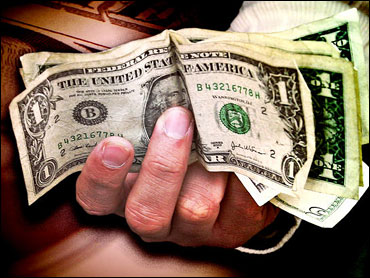 The busy holiday shopping season is over, and you've earned a well-deserved breather. But don't swear off shopping just yet -- some of the BEST deals of the year come in January, as AOL Consumer Adviser Regina Lewis proved on "The Early Show on Saturday Morning"'s special New Year's Day edition:

Such as coats, sweaters, gloves, scarves, etc.: After a couple of months of foul weather, then Christmas, most people have broken down and bought that warm coat. If you haven't, good for you: Sales should abound. Just don't expect the widest selection of styles and sizes.

It may be cold outside, but you can make the indoors warm and comfy -- and save money in the process -- by shopping department stores' "white sales" in January. Now is the time to restock your linen closets.

The tradition of having white sales this month began in 1878, when Philadelphia's John Wanamaker discounted all the white linens in his department store. Today, the January white sales include not only sheeting, towels and blankets in an abundance of colors and prints, but bedding accessories, pillows, bathroom accessories and more.

Sears tells us to look for sales of up to 70 percent off original prices in bedding, bath and window items.

With the Consumer Electronics Show just around the corner, new electronics models will start to arrive at retailers. That means you can expect deep discounts on last year's perfectly good merchandise, including items like digital cameras. For instance, look for savings of as much as 30 percent off at Sears.

There's always a big run on toys for the holidays, and after Christmas, retailers are in a hurry to clear out excess merchandise, often at big discounts. A lot of the toys are those that didn't sell big during November and December, so you may not find all the hottest stuff, but it's a great time to stock up on toy sales with deals as much as half off on sites like Amazon.com. Consider buying a few extra toys to put in the closet for last-minute birthday invites.

January is the time to stock up on wrapping paper, greeting cards and holiday decorations. Get what you need for next year as prices drop by as much as 70 percent.

Gift cards were the most desired gift for the holidays -- according to The National Retail Federation, 57 percent of people asked for them. But every year, people receive gift cards to merchants they don't care to shop at. Many turn to the Internet to sell off their merchant gift cards at a discount to sites like PlasticJungle.com. The site turns around and resells the gift cards at a discount. Consumers can have the opportunity to buy gift cards to over 400 retailers at an average 10 percent discount, sometimes running as high as 30 percent.

Many consumers use Plastic Jungle to "stack discounts" for an even better deal by combining discounted gift cards they bought with a merchant's coupon code, sale or promotion. That way, their savings can multiply.

WalletPop.com also has words of wisdom on what to buy in January.