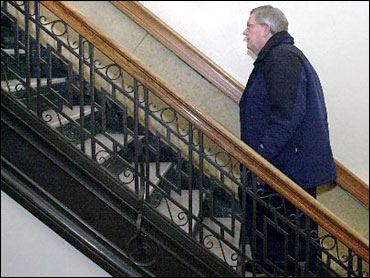 Rep. Bill Janklow lied to officers at the scene of a fatal accident and deserves to be convicted even if he did suffer a diabetic reaction that day as he claims, a prosecutor said Monday in his closing argument.

"This is an easy case because we know the defendant went through a stop sign at 64 to 71 mph," Ellyson said.

Ellyson said Janklow lied about what happened to three different officers at the scene.

Janklow, 64, was charged with reckless driving, running a stop sign, speeding and second-degree manslaughter for the Aug. 16 crash at a rural intersection that killed motorcyclist Randy Scott, 55. If convicted of manslaughter, a felony, Janklow could face up to 10 years in prison as well as a House ethics committee investigation.

The trial began Dec. 1. The defense maintains that Janklow was suffering a diabetic reaction at the time of the crash but didn't know it because the symptoms were masked by heart medication he was taking.

The defense's closing statement was scheduled for late Monday morning, and then the case goes to the jury.

Janklow testified tearfully about the crash Saturday. He said a tight schedule had kept him from eating, even though he knew the risk of taking his insulin and not eating.

"I just plain forgot," he said. As for why, "I've asked myself that 10 million times since this day."

Ellyson contended Janklow didn't suffer a diabetic reaction at the time of the accident.

Janklow told an emergency medical technician that he had eaten earlier in the day and told another EMT that he had checked his blood glucose level, Ellyson said.

Prosecutors argue that Janklow, a self-described speeder, was driving too fast that day as well and ignored a stop sign. A woman testified that Janklow had run a stop sign nearly a year ago at the same intersection where Scott died. The woman said she didn't pursue charges against Janklow because he was governor at the time. On the stand, Janklow denied running the stop sign.