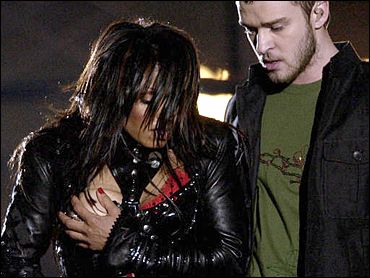 Janet Jackson's boobylicious performance with Justin Timberlake at the Super Bowl halftime show has sparked a federal investigation and set new standards for raunch in an entertainment industry that seems to be setting new highs — or lows every day.

Gone are the days when a powerful performance is all that's needed to deliver a watercooler moment. Nowadays, a barely there outfit, same-sex smooching or foul language — and now, a flash of nudity — are what's required to get America talking.

"Every time an artist does something you think they sort of break the barrier, and it keeps getting more and more outrageous," said Tom Poleman, senior vice president of programming at New York City radio station Z100. "I think artists will keep on exploiting every opportunity they can get."

When Timberlake snatched off part of Jackson's bustier, revealing a breast clad only in a sun-shaped "nipple shield," the barrier was not broken, it was shattered before 89 million viewers.

Federal Communications Commission chief Michael Powell said in a statement, "Like millions of Americans, my family and I gathered around the television for a celebration. Instead, that celebration was tainted by a classless, crass and deplorable stunt." He promised an investigation, with potential fines of up to $27,500. If applied to each CBS station, the fine could reach the millions.

"The issue here is not so much what happened, but it's also what at what time happened," Powell said in an interview with CBS News. "This is a time everyone would have known that children would be in the audience. This is a national event, a prime time event. That's really what's outrageous," he said.

Despite the apparent premeditation — the display coincided exactly with Timberlake singing, "I'm gonna have you naked by the end of this song" — all involved denied that the peep show was planned.

"Just for the record, and to leave no doubt, I know I speak for all of us at CBS when I say how shocked, disappointed and dismayed I was about the incident that occurred during yesterday's Super Bowl Half Time Show," said CBS chief executive Leslie Moonves.

"It is a shame that this regrettable and unfortunate incident cast a shadow on the day. I want to offer my personal assurances that we are looking into this matter and will do everything we can to get to the bottom of it," he said.

"This was done completely without our knowledge," said Chris Ender, entertainment spokesman for CBS, which was deluged with angry calls. "It wasn't rehearsed. It wasn't discussed. It wasn't even hinted at. ... This is something we would have never approved. We are angry and embarrassed."

Although Timberlake issued a statement shortly after the show blaming the debacle on a "wardrobe malfunction," in comments to the syndicated show "Access Hollywood" right after the incident, he didn't seem too sorry.

"Hey man, we love giving you all something to talk about," he said, laughing.

Jackson's official Web site was bombarded with angry postings. Her spokeswoman, Jennifer Holiner, said a red lace garment was supposed to remain when Timberlake tore off the outer covering.

She said she was not sure whether Jackson's medieval-looking nipple decoration was meant to be seen, but added that the singer does wear such jewelry.

But the display still raised questions such as: If it was an accident, why did a choreographer promise "shocking moments" in an interview with MTV.com prior to the show? And how could it be a coincidence with the timing of the words to Timberlake's song "Rock Your Body"?

"It's hard to believe that even MTV, which likes to push the envelope, would have thought it was a good idea to bare someone's breast at half time on the Super Bowl," TV Guide's Michael LeFavore told CBS News Correspondent Lee Cowan.

If it was indeed a stunt, it wouldn't be the first time Jackson has used her sexuality to grab an audience. Over the years, Jackson has evolved from a shy innocent who barely showed her ankles to a vamp who has bared almost all on regular basis.

A classic Rolling Stone magazine cover in 1993 showed a topless Jackson, her breasts covered only by the hands of her then-husband. At the time, she was promoting the album "Janet," which was described as her first time exploring sexuality in her music.

She has revisited that theme often. Promoting "The Velvet Rope" album in 1997, she appeared on the cover of Vibe wearing a nipple ring on the outside of her clothing. On her last album, "All For You," she appeared on the album's artwork nude, obscured only by a sheet. And in a recent HBO concert special, Jackson was seen running topless in a waterfall, though her breasts were barely visible.

And of course, Jackson has a new album, "Damita Jo," due out in the spring. The single, "Just A Little While," hit radio late last week. Already, the hype for the album promises a disc in which Jackson explores — what else? — her sexuality.

Asked whether he thought the strip tease was an accident, Z100's Poleman laughed.

"Are you kidding me?" he said.

Over-the-air TV channels cannot air "obscene" material at any time and cannot air "indecent" material between 6 a.m. and 10 p.m. The FCC defines obscene as describing sexual conduct "in a patently offensive way" and lacking "serious literary, artistic, political or scientific value." Indecent material is not as offensive but still contains references to sex or excretions.

The FCC has come under fire from lawmakers and outside groups who say the agency hasn't done enough to shield the public from indecent programming. The Bush administration has endorsed a bill raising the $27,500 maximum fine to $275,000.

Last month, the FCC proposed a $755,000 fine against Clear Channel Communications for a program that aired multiple times on four Florida radio stations — a record for a single complaint. The largest cumulative indecency fine was $1.7 million paid by Infinity Broadcasting in 1995 for various violations by Howard Stern.

Over at Z100, whose audience tends to range from 12 to 34 years old, the radio station was playing Jackson's new single every two hours on Monday.

"All of our listeners, they saw right through it," Poleman said. "Nobody is buying for a second that it wasn't a setup, but at the same time, they're cool with it."

So were stores that sell nipple jewelry. In Greenwich Village, Cassioppia Tattoo and Piercing's owner Bianca Bubenik placed a newspaper photo of the singer and her exposed breast in a display case alongside nipple decorations similar to the one Jackson wore.

"She's coming out with a new CD soon," Bubenik said. "We were just discussing it this morning — it's a publicity stunt."

And it has people talking at just the right time about Jackson — until the next celebrity shocker.

Already this year, we've seen Britney married, Michael Jackson dancing at his child molestation arraignment and Steve Irwin frolicking with his newborn and a crocodile ... and it's only February.

"Who knows?" said Poleman. "It's up to their imagination."