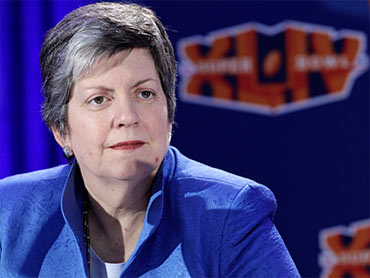 In a Monday editorial for USA Today, Homeland Security chief Janet Napolitano urged Americans to be patient in the face of heightened new airplane security measures that some have decried as invasive, time-consuming, and likely to cause travel delays in the upcoming Holiday season.

Citing last year's thwarted terrorist attack on a Christmas Day flight, Napolitano defended the newly-implemented use of advanced body scanners and thorough pat-downs as preventative travel security measures, despite some calls of protest.

"Al-Qaeda and those inspired by its ideology are determined to strike our global aviation system and are constantly adapting their tactics for doing so," Napolitano wrote. "Our best defense against such threats remains a risk-based, layered security approach that utilizes a range of measures, both seen and unseen, including law enforcement, advanced technology, intelligence, watch-list checks and international collaboration."

As CBS News travel editor Peter Greenberg points out, the new measures - which include pat-downs and/or a walk-through scanning machine that scans travelers' bodies to create what some have called a "naked" image" - have been criticized for being overly intrusive toward passengers.

Early backlash against the policies has become pervasive: The Allied Pilots Association, which hosts 11,500 members and is the largest independent pilots' union in the world, has gone as far to liken the procedures to a "virtual strip search" and a "grope." And the travel group flyersrights.org has said it plans to boycott the full-body scanners, and will insist that pat downs take place in a private room with a witness present, according to USA Today.

But Napolitano emphasized the importance of the measures for safety purposes, and argued that the scanners - Advanced Imaging Technology (AIT) units that help detect concealed metallic and non-metallic threats - are "safe, efficient, and protect passenger privacy."

She also pointed out that the privacy of travelers is protected through "rigorous" safeguards. "All images generated by imaging technology are viewed in a walled-off location not visible to the public. The officer assisting the passenger never sees the image, and the officer viewing the image never interacts with the passenger. The imaging technology that we use cannot store, export, print or transmit images," she continued.

"We ask the American people to play an important part of our layered defense," Napolitano wrote. "We ask for cooperation, patience and a commitment to vigilance in the face of a determined enemy."

Some also worry that the policies will add to airport wait time during the holiday travel season. According to Greenberg, if more than one passenger opts out from the body-scanner - in which case he or she is subjected to a pat-down - "the delays can become exponential."

In her op-ed, Napolitano asked for the "patience and vigilance" of the American public, and promises that the new requirements serve an important purposes. "Each and every one of the security measures we implement serves an important goal: providing safe and efficient air travel for the millions of people who rely on our aviation system every day," she wrote.