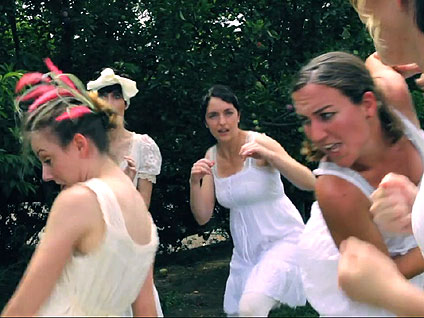 NEW YORK (CBS) If you're familiar with the classic '90s motion picture "Fight Club," you'll know some of the perennial rules. Now weave in a little bit of English novelist Jane Austen and you'll get this line: "No corsets, no hatpins and no crying."

A new viral video has surfaced, combining romantic fiction and underground fighting in the trailer for a faux movie about Austen's favorite heroines - Lizzy Bennett, Emma Woodhouse and the Dashwood sisters - who are no longer in "good society."

The juxtaposition is delectable yet cool, with prim and proper ladies of the nineteenth century throwing up their dukes to challenge each other to secret fighting sessions.

Don't fret. Even if you haven't seen "Fight Club" or read any of Jane Austen's works, it's not spoiling anything you wouldn't already know from a few film trailers.

Interestingly enough, music from the "Kill Bill" movie (Tomoyasu Hotei's "Battle Without Honor or Humanity") was used instead of the aggressive electronic score by The Dust Brothers in the original "Fight Club" film.

"How's that going for you being clever?" a gentleman asks "Janet Austen's Fight Club" member Fanny at the end.