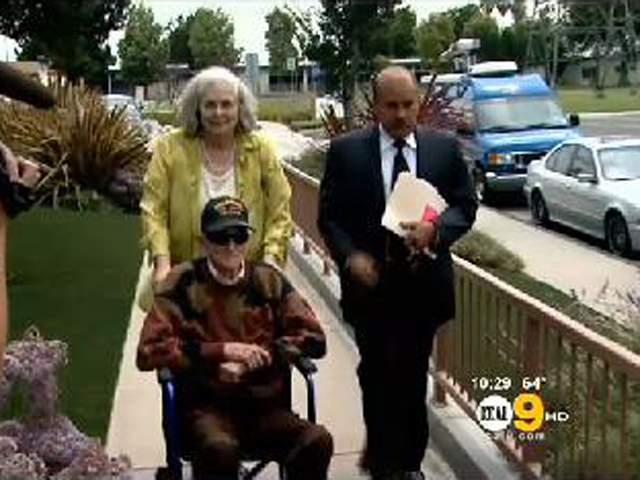 (CBS/AP) STANTON, Calif. - A 72-year-old Southern California woman said Tuesday she doesn't regret shooting at a man trying to break into her home to defend herself and her 85-year-old husband.

Jan Cooper, of Anaheim, fired one shot from her .357 revolver around 12:30 a.m. Sunday as a man attempted to break into her home. In a 911 call, Cooper begged with the dispatcher to send deputies and warned that she had a gun at the ready, as her Rottweiler barked in the background.

Minutes later, a breathless Cooper said the man had come to the back porch and was trying to get in the house through a sliding door.

Through the vertical blinds, Cooper saw his silhouette just inches away through the glass as he began to slide open the door.

"I'm firing!" Cooper shouted to the dispatcher as a loud bang went off.

According to CBS Los Angeles, Cooper said "Back up you son of a *****. Back up! Get out of here! Get the hell out of here! Get your butt out now!" The shouting was recorded on the 911 call.

"You'd better get the police here. I don't know whether I hit him or not. I'm not sure. He's standing at my door, my back door. He's in my yard," she said.

The suspect, Brandon Alexander Perez, 31, was not hit and was arrested a short while later by responding deputies, who heard the gunshot, said Jim Amormino, spokesman for the Orange County Sheriff's Department.

Perez pleaded not guilty to a burglary charge.

His criminal record includes other burglary and narcotics charges. He was on parole and staying at a halfway house not far from the Coopers' address, Amormino said.

Cooper's gun, which she has owned for about 20 years, was legally purchased and properly registered, he said.

"Even though that dog was barking, he still was desperate to get in. So who knows what may have happened if she didn't fire that round," Amormino said.

On Tuesday, Cooper was soft-spoken and composed, with her gray hair pulled back neatly in a hairband and her husband, a decorated World War II veteran, by her side during a news conference at a sheriff's substation.

Cooper said she is amazed by the anger in her voice - and the curse word she let fly - after she fired the shot.

"I am a Christian woman and I'm very proud of it and I don't curse, but after I shot, rage took hold and I just blasted away," she said. "And, in fact, afterwards my husband said, `I've never heard you talk like that!"'