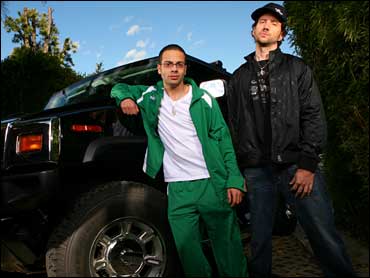 Jamie Kennedy sounds exhausted. Maybe it's because the busy actor-comedian is currently filming a series for MTV, he just wrapped a film in which he does his own vigorous break-dancing routines — and he's just taken a painkiller that can cause drowsiness.

"I'm not Elizabeth Taylor but I did just take a Vicodin," Kennedy says in a phone interview with CBSNews.com. "I'm in so much pain. I hurt my ribs."

Kennedy, best known for his WB series "The Jamie Kennedy Experiment" and for roles in the "Scream" films, hurt himself break-dancing for the movie "Kickin' It Old Skool," which he just finished filming in Canada. His new TV series, "Blowin' Up," also starring his friend, actor Stu Stone, premieres May 16 and documents their quest to become hip-hop superstars.

The idea for the show came about after Kennedy and Stone (who met on the set of the 2001 animated comedy "Da Mob") wrote and recorded a few rap songs.

"The songs were getting better and better, and then we said we're going try to get a record deal," says Kennedy, 35. "The process of getting a record deal became so crazy, we kept saying to each other 'where are the cameras?' So we went to MTV and told them what was happening to us. They said it sounds interesting, so they started filming us and the show was born."

"Blowin' Up," which Kennedy describes as an unscripted comedy, follows the duo as they troll around Hollywood shopping their songs and getting advice from people in the industry, like Def Jam founder Russell Simmons, rapper Bow Wow, music producer Joe Simpson (father of Jessica and Ashlee), and "Beverly Hills, 90210" alum Brian Austin Green.

Preview: Elton John's mother told him, "I love you, but I don't like you"

In case you don't recall, aside from having a successful gig as David Silver on the '90s TV hit, Green also tried his hand at rap. The "Notorious BAG," as Kennedy calls him, "was the only guy who ever acted first and then did rap. He dropped an album in the mid-'90s. It was really respected, but it didn't sell very much. David Silver knows how to hold it down."

Kennedy and Stone meet with Green in an episode of their show and listen carefully to his tips on breaking into rap music. "He's like, 'respect the game, respect the technique and do your thing,'" Kennedy says. "He's like, 'it's going to be hard because no one is going to take you seriously.'"

With a rap titled "Strip Club Dummy" in their collection, it is indeed hard to take Kennedy and Stone's rap seriously, but it seems that you're not really supposed to. Also in their repertoire: a ditty called "Knuckle Up" about actor Colin Farrell's sex tape scandal and another dubbed "Where's the Beef?" which Kennedy says is "all about what happened to me in 1984. Garbage Pail Kids, Ghostbusters."

It's not exactly Grammy-winning material, but Kennedy insists their desire to make it in the biz is "for real."

"I mean, what white kid from the suburbs doesn't want to be a rapper?" he says. "I've probably wanted to be a rapper since I was a teenager. I was an actor and comedian and stuff, but I always wanted to rap, it was another outlet."

In "Kickin' It Old Skool," due out next year, he stars as a break dancer who hits his head and goes into a coma for 20 years. When he snaps out of it, he tries to get the old crew back together. "He wakes up in 2006 and he has the mentality of a 12-year-old," Kennedy explains. "I play this guy. Big surprise."
By Amy Bonawitz