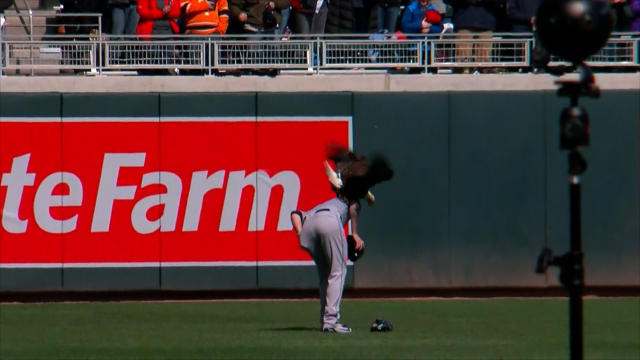 MINNEAPOLIS -- The pageantry and patriotism accompanying the buildup to the Minnesota Twins' home opener forced a pause for James Paxton in his warmup routine, leaving the Seattle starting pitcher standing alone in left field while a giant flag was unfurled nearby. The bald eagle brought in for a ceremonial flight over the field was the final piece of the pregame pomp, prior to the playing of the national anthem.

Well, the big bird didn't want to visit the mound, perhaps wary of Major League Baseball's new rule limiting such trips to keep the pace of play. Instead, it picked out another target at Target Field.

And Paxton wound up as the landing spot, sticking its talons into his back.

"I guess the eagle knew I was Canadian. I don't know. But it came for me," the left-hander said on Thursday evening after the Twins rallied past the Mariners 4-2 .

Even on a 38-degree afternoon against a big-swinging lineup, the toughest task for Paxton might have been keeping his composure during that startling moment before the game when the pastime of bird watching took on a whole new meaning.

"Figured I'm not going to outrun an eagle," Paxton said. "So might as well see what happens."

Rather than soaring to the mound to reach his summoning handlers, the bird took a path straight toward Paxton, causing him to jerk his upper body backward to avoid being grazed. Then the eagle, named Challenger, landed in the grass before circling back to find a perch on Paxton's right shoulder. One of the trainers hustled out to lure the bird safely away and make sure Paxton was all right.

"I kind of ducked it so it wouldn't fly into my face. It was, I think, trying to stand on my back," Paxton said. "And then I thought, 'OK, if I can stand up slowly, maybe it'll just rest on my shoulder. But as I stood up, he kind of fell off my back a little bit and was kind of clawing to try to get back up on my shoulder. But then as I stood straight up, it fell back onto the ground."

So he simply resumed warming up.

Talk about poise under pressure.

"I was just standing there, trying not to panic," he said.

According to CBS Sports the bald eagle has made an appearance in five World Series and other sporting events. The bird has also flown in Disney's Animal Kingdom.

Both teams had a good time reliving the moment. Mariners manager Scott Servais said he thought fellow starting pitcher Felix Hernandez would have run away. Twins center fielder Byron Buxton had no trouble admitting that would have been his reaction, too.

"When I saw him like perk up on Paxton's arm, I'm gone," Buxton said. "He wouldn't have a chance to get on my shoulder."

Twins catcher Mitch Garver said the large-talon landing was "terrifying." Twins closer Fernando Rodney joked about using one of the imaginary arrows he shoots into the air after converting a save to try to bring down the bird.

Minnesota fans, meanwhile, could probably appreciate an eagle-free sporting event at this point. The Vikings lost to the Philadelphia Eagles in the NFC championship game this winter, of course, before the Eagles came to Minneapolis two weeks later to win their first Super Bowl.