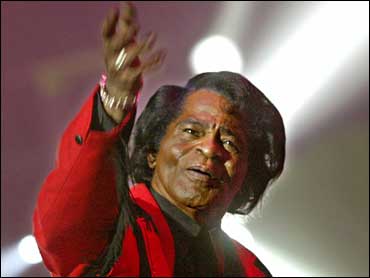 More than 300 items that belonged to "The Godfather of Soul," James Brown, are going on the block at Christie's auction house in New York.

The memorabilia will include performance outfits, awards, platinum records, instruments, furniture, handwritten lyrics, and odds and ends once owned by the R&B icon.

The items go under the hammer on July 17, but can be viewed on the Christie's site by clicking here.

Early Show viewers got a preview of several of them Saturday from Simeon Lipman, the head of pop culture at Christie's, who provided these descriptions.

James Brown Cape (Black
James Brown used the black cape on stage during many performances. James had an amazing sense of performance style. There aren't many comparable that are stars today. He would famously drop to the floor and his girls would put the cape on his shoulders.
Bidding Starts at $15,000

James Brown Doll, singing
He kept this doll in his living room.
Bidding starts at $300

Photo of him in leather jacket and Leather USA Jacket
This goes along the lines of how much he celebrated his love of his country. And he kept the outfits he wears on stage in pristine condition. He wore it quite a bit; it's in great shape.

Photo and GFOS Jumpsuit
GFOS (Godfather of Soul) stage-worn jumpsuit from the 1974 concert preceding the "Rumble in the Jungle" fight between Muhammad Ali and George Foreman in Kinshasa, Zaire. The Oscar-wining documentary "When We Were Kings" shows this concert, and James brought the house down in that outfit.
Bidding starts at $5,000

Photo of JB with Keytar & the Mogo Electric Keytar
An extinct instrument that he played -- keyboard and guitar, he played it on stage.
Bidding starts at $2,000
MMVIII, CBS Interactive Inc. All Rights Reserved