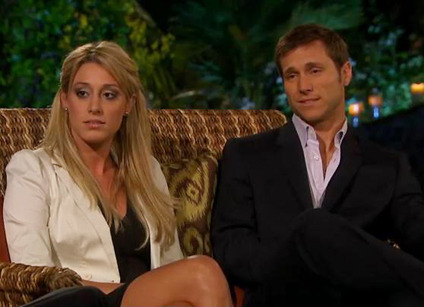 During the drama-filled interview, the two tackled heated topics surrounding their highly-publicized split, while also exposing new tidbits of their relationship.

Pavelka, 32, reconfirmed his anger about how Girardi, 24, sold her story to Star magazine, while also claiming that he endured constant undermining from Girardi during their relationship.

"She's like a tabloid. You get 40 percent of the truth," Pavelka said.

However, Girardi was quick to jump to defense by citing "emotional abuse" and repeatedly accused Pavelka of being the "biggest fake liar ever."

"My impression was that you were a pilot and we were going to go back to Florida and Dallas and live a normal life. Instead, we're in L.A. and you're pursuing a career in acting," Girardi said.

In the end, the interview was dramatically cut short and, not surprisingly, provided zero resolution. Girardi stormed off the set in tears after Pavelka lost his cool and sternly scolded Girardi to stop interrupting him.

"Unfortunately, that is what one of our arguments looks like," Pavelka said smugly. "It's kind of embarrassing."