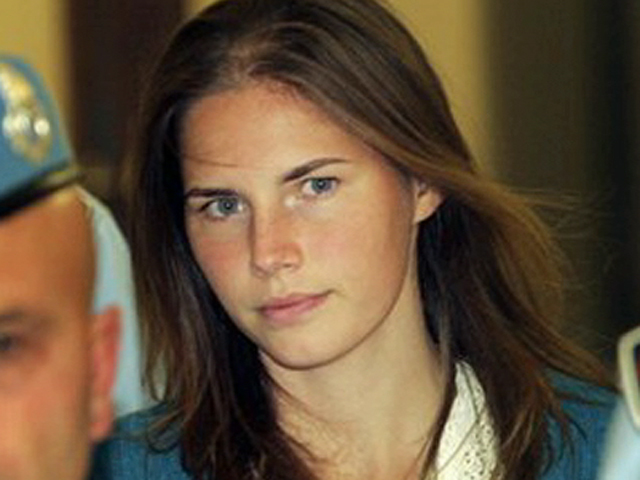 CHICAGO (CBS) Last week, a bombshell landed in the case of Amanda Knox, an American student jailed in Italy for allegedly killing her roommate during a sex game. But who will it help and who will it hurt?

At first glance, the "bombshell" came from a very unlikely source - Mario Alessi, a convicted child murderer who is serving a life sentence in Italy for kidnapping and killing a 17-month old child in 2006.

In a videotaped statement broadcast by Italian media last Friday, Alessi proclaimed Amanda Knox is an innocent victim of the Italian justice system.

Last December, a court in Perugia, Italy found Knox guilty of murdering her British roommate, Meredith Kercher, in November 2007. Knox was sentenced to 26 years. Her Italian ex-boyfriend, Raffaeele Sollecito, was also convicted and given 25 years.

Alessi said they are both innocent.

But why would anyone listen to a man who confessed on tape to beating a toddler to death with a shovel because the child "was crying?"

Surprisingly, there is at least one good reason and it has to do with the place Mario Alessi now calls home.

Alessi is currently housed in the isolation wing of the Viterbo maximum security prison in Italy. Alessi's prison mate is Rudy Guede.

In 2008, Guede, an Ivory Coast native, was the first person convicted for killing Meredith Kercher. He was given a 30 year prison term, recently cut to 16.

He has always maintained his innocence, but his new roommate claims he had some shocking things to say about the murder - namely that Amanda Knox and Raffaeele Sollecito had nothing to do with it.

Last month, in a videotaped statement to Sollecito's defense lawyer, Alessi claimed that Guede said Knox and Sollecito were never at the crime scene.

But Guede wasn't alone, claims Alessi. He said Guede offered that another male friend slit Kercher's throat while he watched. Guede refused to identify the "other" friend.

Over the weekend, reaction to Alessi's video was swift. From prison, Guede says he never talked with Alessi about Meredith Kercher's murder. His defense lawyer calls allegations "nonsense." The Italian lawyer for the Kercher family calls Alessi a liar."

Alessi says there are three other prisoners who heard Guede's statements. Sources close to the case tell CBS News that since Alessi came forward, those three prisoners have been quietly moved out of Viterbo and scattered to other prisons throughout Italy.

Italian media is reporting that Alessi also told his Guede claims to both a priest and a nun who frequently visit the Viterbo prison.

CBS News has learned that while Guede was in jail in Perugia in 2007 and 2008, he told his Ivory Coast birth-father that he was with an unidentified male at the crime scene. He refused to name that person. That conversation was recorded and is part of Guede's Perugia case file.

Still, Mario Alessi has a serious credibility problem. Back in 2006, when he was first questioned by police about the murdered toddler, Alessi went on Italian television and avowed his innocence saying, "You shall not touch children!"

A month later, Alessi was leading police to the shallow, riverside grave where he had buried Tommaso Onofri.

But does Alessi's credibility matter at this stage in the Knox case? Maybe not.

Amanda Knox's defense team in Italy rarely engages the Italian media, preferring to make their case in court. But Raffaele Sollecito's lawyer, Giulia Bongiorno, who holds a seat in the Italian Parliament, is a politician. When Bongiorno released the Alessi tape, it was a stunning political move.

At the beginning of last week, the court that convicted Knox and Sollecito released a nearly 500-page document describing the verdict and Italy was abuzz with the "motivations" for the crime.

But by week's end, the conversation had turned 180 degrees - a cry from the blue claiming Knox and Sollecito were wrongfully convicted.

It was a brilliant piece of media and political theater.

Unlike in the United States, sitting jurors in Italy are free to watch or read anything they want about the cases they are deciding. By the end of this year, both Knox and Sollecito will face another six jurors when their appeals are heard.

It was very shrewd of Giulia Bongiorno to plant early seeds of doubt in the minds of potential, future jurors in Perugia, even if that "seed" was convicted child killer Mario Alessi.