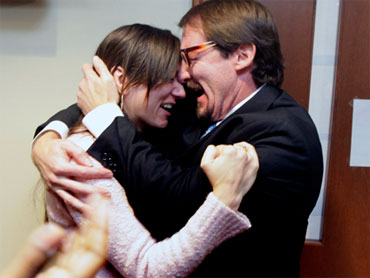 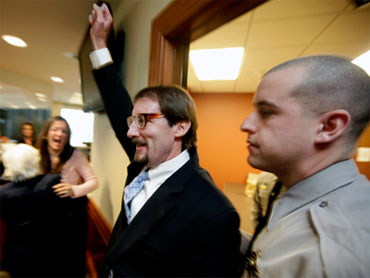 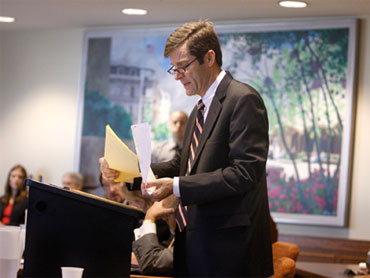 (AP Photo/Shawn Rocco)
RALEIGH, N.C. After more than 16 years of proclaiming his innocence for a brutal murder, Greg Taylor's shackles were finally removed and he was able to hug the grown daughter he left as a little girl.

Photo: Greg Taylor after being exonerated 16 years after his conviction for murder.

In 1993, Taylor was convicted in the death of Jacquetta Thomas, a prostitute found dead at the end of a Raleigh cul-de-sac two years earlier.

Taylor had exhausted all avenues of appeal when the North Carolina Innocence Inquiry Commission reviewed his case and decided last September it merited another look.

According to Taylor's version of events, he and a friend, Johnny Beck went to a deserted cul-de-sac to smoke crack cocaine. His SUV got stuck in the wooded area, and, as the two men walked out to hitch a ride, they saw what they thought was a body. They didn't call the police.

Beck testified during the special hearing Jan. 11 that neither of them knew or had ever seen the 26-year-old prostitute that Taylor was convicted of killing.

"I know this man is innocent today," Beck testified Feb. 11. "To this day, I don't understand how this man got convicted. It's mind-boggling. It's scary. It really is."

After the ruling, Wake County District Attorney, Colon Willoughby, whose office led the charge to keep Taylor behind bars, immediately walked over to Taylor and apologized.

"I told him I'm very sorry he was convicted," Willoughby said later. "I wish we had had all of this evidence in 1991."

But the family of the victim hopes that their loved one won't be forgotten in all the excitement.

"It is just not over," Sierra Pharr told WRAL. "There is [sic] a lot of questions. Where is this person? Who did it? Now what?"

Reacting to the verdict Taylor told WRAL, "It's unbelievable, I mean, you think all these years what this day would be like – 6,149 days, and finally the truth has prevailed."