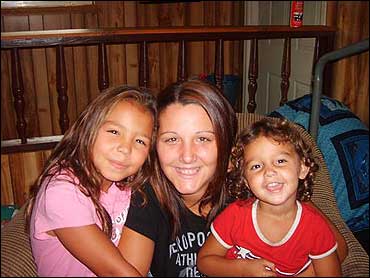 A jail warden said Sunday he will ask a judge to move an 11-year-old boy accused of killing his father's pregnant girlfriend from an adult lockup to a juvenile detention center because the jail cannot accommodate the boy.

Houk was eight months pregnant with the child of Brown's father and also had two daughters, ages 4 and 7, who lived together in the rural home where authorities said she was slain as she lay in bed Friday.

In Pennsylvania, police said after the killing Brown hopped onto a school bus with Houk's oldest daughter. State troopers picked him up at school after tree trimmers called emergency services when Houk's youngest daughter told them she thought her mother was dead.

"This is something that you wouldn't even think of in your worst nightmare," said Bongivengo.

The boy has been held in a jail about 45 miles northwest of Pittsburgh since early Saturday, Adamo said. Brown faces a preliminary hearing on Thursday to determine if he'll stand trial. He was charged as an adult because Pennsylvania law allows prosecutors to charge children as young as 10 with criminal homicide.

Brown's attorney, Dennis Elisco, said he planned to file motions on Monday asking a judge to move the case to juvenile court and to let the boy's father post bail so the boy can be freed.

"I want him to be occupied and busy and back, essentially, in school," Elisco said.

Adamo said the boy was being held in one of four 10-by-8-foot cells in the jail's booking area, where officials check on him every 15 minutes.

He said the boy cannot receive visitors - except for his attorney - because doing so would require him to mingle with adult inmates. Even something as simple as letting the boy shower would require locking down a cellblock, most of which hold up to 63 inmates, Adamo said.

"They put a shirt on him; he's swimming in it, and his pants are cuffed up about 10 times," he said.

Elisco said the boy has not confessed to the shooting. He said he didn't believe the physical evidence would support police's claim that the boy killed Houk, execution-style, with one shot to the back of her head.

"I wouldn't know anybody in the world who would want to kill a 26 year-old beautiful daughter like mine and take a child," said Jack Houk, the victim's father.

Police and Lawrence County District Attorney John Bongivengo haven't discussed a motive, though Houk's family and friends told The Associated Press that jealousy might have been an issue.

"He actually told my son that he wanted to do that to her," Houk's brother-in-law, Jason Kraner, said Saturday. "There was an issue with jealousy."

Patricia Papernow, a psychologist from Hudson, Massachusetts, and expert on blended families, said tensions from combining families, as Brown's father and Houk were doing, were "pretty normal in a new stepfamily."

"It looks awful from the outside and sort of unspeakable, but these are the kinds of feelings that are pretty normal in a new stepfamily," Papernow said. "You just hope there's not a loaded gun around."