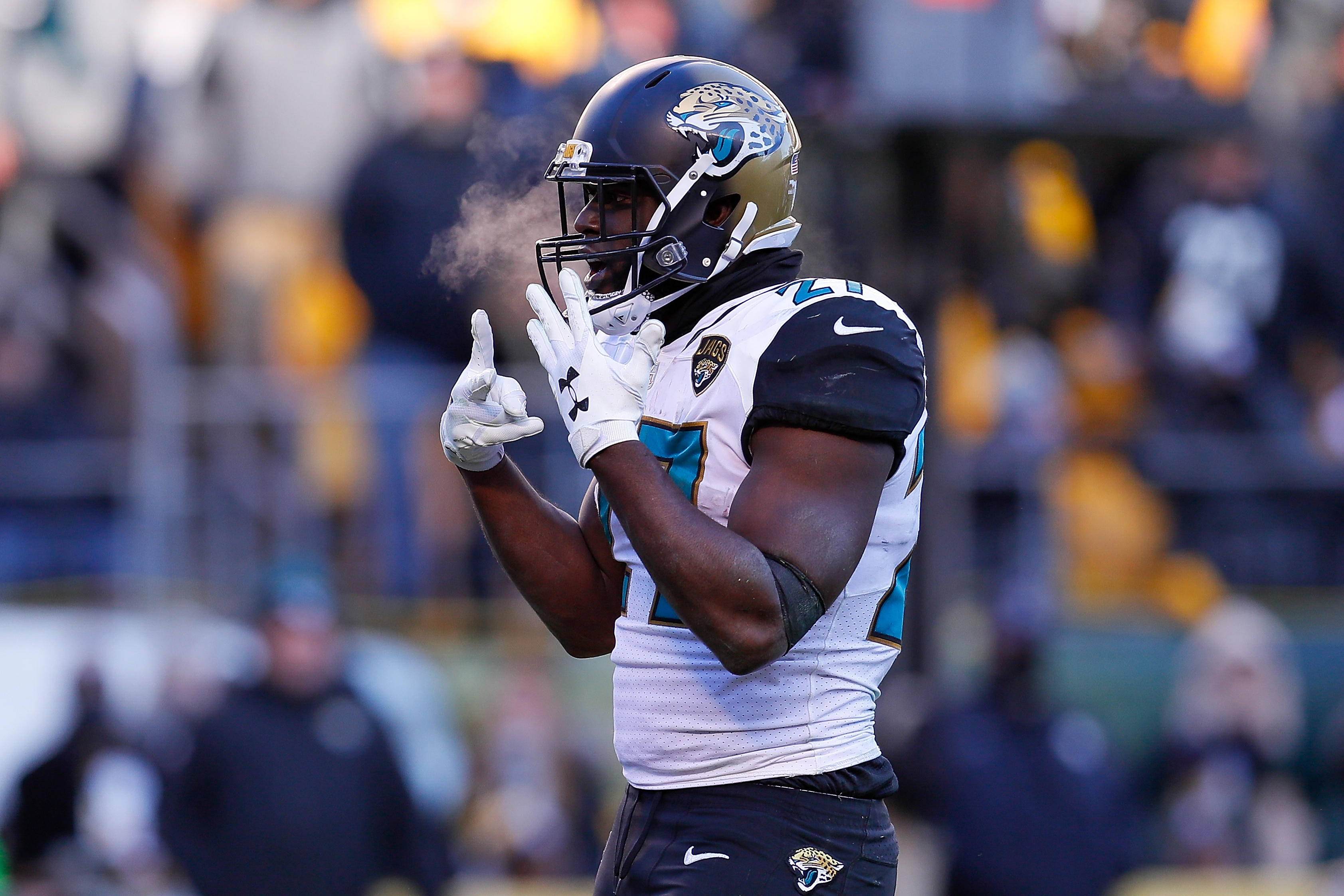 The third-seeded Jaguars (12-6) will face top-seeded New England next week in Foxborough, Massachusetts, after jumping on Pittsburgh early, then holding on late. Jacksonville raced to a 21-point lead, fended off a Steelers rally and responded every time Pittsburgh (13-4) challenged.

CBS Sports posted a throw back tweet from January 1997 between the Patriots and Jaguars as a reminder:

Ben Roethlisberger threw for 469 yards and set a franchise record with five touchdown passes, but was also intercepted once and had a fumble returned for a score. All-Pro Antonio Brown caught seven passes for 132 yards and two touchdowns in his return from a left calf injury. Le'Veon Bell had 155 yards of total offense and two scores.

CBSSports.com wrote earlier Sunday that back in Week 5, Roethlisberger had such an ugly game against the Jags that he basically rooted for them in the Wild-Card round just so he would get another shot at one of the NFL's best defenses.

The victory in October served notice Jacksonville was ready to put a decade of losing firmly behind. This one sent an even bigger message: overlook the Jaguars at your own peril, something Pittsburgh appeared to do in the run-up. Coach Mike Tomlin hinted at facing the Patriots twice back in December. Running back Le'Veon Bell posted on Twitter about the pair of "round 2s" the Steelers will face in coming weeks.

Turns out, one rematch is all the Steelers will get.

A week removed from an ugly performance in a wild-card round win over Buffalo in which he passed for 87 yards and struggled with the easiest of throws, Bortles went 14 of 26 for a touchdown without an interception. He ran for 35 more and wasn't sacked by a defense that led the NFL and set a franchise record with 55 during the season. Jacksonville's 45 points tied the most ever allowed by the Steelers in the playoffs.

Not bad for an offense that at times simply appeared along for the ride as the NFL's top defense carried the load.

"Blake Bortles has always been criticized," Fournette said. "It is different now. He has guys that have his back, especially me."

Certainly looked it as Fournette scored two first-quarter touchdowns. The Jaguars built a 21-point lead and responded whenever the Steelers rallied to get within one score.

"The guys played with confidence all day long," Bortles said. "Obviously, what they have on their side of the ball, it's a good team. We know they got a good offense. We knew we were going to have to be efficient, hold on to the ball for a little bit, so we did it."

Ben Roethlisberger threw for 469 yards and set a franchise record with five touchdown passes, but was also intercepted once and had a fumble returned for a score. All-Pro Antonio Brown caught seven passes for 132 yards and two touchdowns in his return from a left calf injury. Bell had 155 yards of total offense and two scores.

"It's disheartening," Brown said. "I thought we had the right group of guys."

The Jaguars dominated the Steelers on Oct. 8, winning by three touchdowns in a performance so overwhelming Roethlisberger only half-jokingly wondered aloud whether he still had "it' after throwing a career-high five picks.

Roethlisberger and his teammates left little doubt they hoped for a rematch, though Jacksonville cornerback A.J. Bouye cautioned Pittsburgh to be careful what it wished for. The Jaguars hardly appeared intimidated by the 18-degree chill or trying to earn their first road playoff win in a decade.

"I'm sure there will still be tons of people that are going to disapprove and talk negative or hate or do whatever they want," Bortles said. "But we get to keep playing and we get an opportunity to play in Foxborough next week for another week. Just honored to be able to do this especially with this group of guys."

"It's been an awesome year. Just want to keep it going."

Pittsburgh rolled up 545 yards of offense, but it's 2 yards the Steelers didn't get that helped send them into an offseason filled with questions.

Twice Pittsburgh had fourth-and-1 in Jacksonville territory. Twice the Steelers did something other than have the 6-foot-5 Roethlisberger sneak. Pittsburgh ran wide in the first quarter and Bell was stuffed for a 4-yard loss. The Jaguars responded immediately by going 75 yards in 11 plays, the final one a 4-yard sprint by T.J. Yeldon that put them up 21-0.

The Steelers were down a touchdown early in the fourth quarter and had fourth-and-inches at the Jacksonville 39. Roethlisberger checked at the line of scrimmage, faked a handoff to Bell and instead threw incomplete to diving rookie JuJu Smith-Schuster.

"It's been a while since I've run a quarterback sneak, I'm for it," said Roethlisberger, who added he will return in 2018. "That's kind of over my head when it comes to why we don't do it. I'm not going to sit here and second guess why we didn't quarterback sneak. I don't know how many years it's been since we quarterback sneaked."

The Jaguars travel to New England, where they were beaten in the 1996 AFC title game.

The Steelers, despite tying for the league's best record, head home.