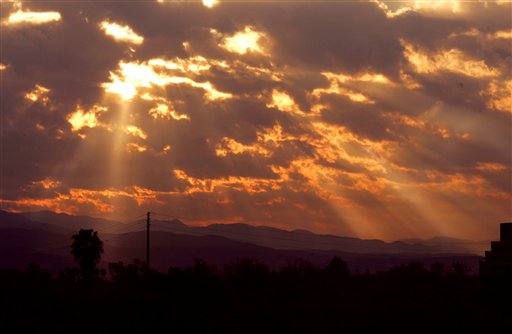 The hippie is going Hollywood.

It's the "Shaq, Kobe & Glen Show," directed by Phil Jackson and featuring Jack Nicholson and Dyan Cannon in supporting roles.

Jackson, the motorcyle-riding Zen master with a knack for conjuring up championships, is bringing his unique coaching style to Los Angeles.

He agreed Tuesday to become the Lakers' coach for a reported $30 million, five-year contract. He said the negotiations went smoothly.

"I feel like a very lucky man today to be in a position where I can accept this job," Jackson told a news conference. "I think this was a marriage that was in the making."

Jackson, who replaces interim coach Kurt Rambis, called the Lakers as "a team on the verge."

"We think he's a pre-eminent coach in America," said Jerry West, the Lakers' executive vice president. "We think this is going to be the start of another fantastic time for us."

Jackson enters the next stage of his basketball life without Michael Jordan, whom he hasn't spoke with since May. And, in what might be the ultimate compliment for any player, he said Kobe Bryant reminds him of Jordan.

Jackson was coveted by the New Jersey Nets and, to a lesser degree, the New York Knicks.

"Of all the jobs out there, this was the one that piqued my interest," he said at a news conference.

The NBA's coach of the '90s with the marquee cast of Jordan, Scottie Pippen and Dennis Rodman, Jackson will try to match his success with Shaquille O'Neal, Bryant and Glen Rice.

Jackson didn't rule out having Pippen and Rodman rejoin him in Los Angeles. But he said he had not conferred with West about that.

He takes over a team that hasn't won a title in 11 years after being the league's dominant force in the 1980s with Magic Johnson, Kareem Abdul-Jabbar and Showtime.

The Lakers won five championships in the '80s, but haven't reached the NBA Finals since 1991, when they were beaten by Jackson and the Bulls.

During his nine years in Chicago, Jackson orchestrated the diverse talents and egos of his stars into an NBA powerhose that won six titles this decade and became one of the league's best teams ever.

He will face a similar challenge with the Lakers, widely regarded as a splintered group of talented underachievers.

Jackson seems equipped for the job.

A coach who has gone to bookstores to pick out books for each of his players, he was motivator, mediator and basketball maestro all in one for the Bulls.

He related to the players with, as Jordan refers to it, "that Zen Buddhism stuff."

Even the bizarre Rodman, who spent a mostly disastrous month and half with the Lakers this season, thrived under Jackson in Chicago.

When Rodman heard Jackson was taking the Lakers' job, he told Fox Sports News, "I would like to play for Phil Jackson and the Lakers. I think he's the only coach in the league that really understands me."

Jackson averaged 6.7 points in his 13-year NBA playing career, 11 of them with the New York Knicks. He missed their 1970 title season because of a back injury, but played on their 1973 championship team.

He is one of only nine men who have won NBA titles both as a player and as a head coach.

Jackson worked his way up the coaching ranks, leading the Albany Patroons of the CBA for five years. He served as an assistant under Doug Collins with the Bulls for two years before Collins was fired and he became the head coach on July 10, 1989.

The Lakers fired Del Harris 12 games into last season and promoted Rambis from his job as an assistant.

They were swept in the playoffs for the second year in a row, losing in the second round to San Antonio after being beaten by Utah in the Western Conference finals last year.

The Lakers' courtship of Jackson was a whirlwind affair. The Lakers recently indicated that Rambis would be retained, but team owner Jerry Buss instead decided to spend more millions to go after the high-profile Jackson.

The Lakers began talking with Todd Musburger, Jackson's agent, last week. Jackson was off fishing in a remote area of Alaska, and Lakers executives West and Mitch Kupchak offered him the job in a telephone call Monday, after he returned to Montana.

He obviously was easy to woo, quickly deciding to take the job.

Jackson already planned to be in Los Angeles Wednesday to campaign for presidential candidate Bill Bradley, his former Knicks teammate.