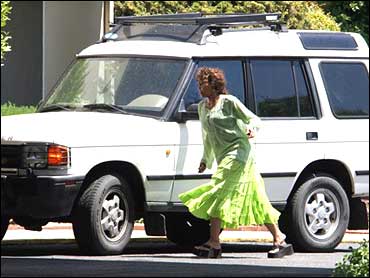 Michael Jackson was treated at an emergency room for what his spokeswoman described as a continuing back problem that flared up again a day before jurors in his child molestation case were to return to work.

Jackson returned to his Neverland ranch to await the verdict with his family. Jurors received Jackson's case Friday afternoon and deliberated for about two hours before adjourning for the weekend. They are expected to resume their work on Monday.

The singer, who has complained of back trouble throughout his trial, left the Santa Ynez Valley Cottage Hospital late Sunday to the screams of fans. He had arrived nearly six hours earlier.

"Mr. Jackson's back has spurred up on him again," said the singer's spokeswoman, Raymone K. Bain said soon after the singer arrived. "It's pretty serious. It was serious enough for him to come over here."

Jackson is charged with molesting a 13-year-old boy in February or March 2003. He is also accused of plying him with wine and conspiring to hold the boy's family captive.

Jackson has cited medical problems at several points during the trial. Jury selection was halted in February when the 46-year-old singer complained of flu-like symptoms, and he said his back problem began on a day when his accuser was on the stand.

The singer said at the time that a fall had forced him to go to the emergency room, and he rushed back to court wearing pajama bottoms when the judge threatened to have him arrested.

Bain said stress contributed to the entertainer's back problem Sunday. "He's under a tremendous amount of stress right now," she said. "Other than his back, he is doing fine."

"I don't think this hospitalization will affect jurors - even if they find out about it, which they shouldn't, because they've been ordered to avoid all coverage of this trial," says CBS News Legal Analyst Andrew Cohen. "It doesn't have any relation to the charges. And I don't think it is going to generate any sympathy, either, if that's what Jackson intended."

"What lawyers for both sides are hoping now is for some steady work by these jurors, who have stuck together, without any illnesses or lateness even, during the course of this long trial," says Cohen. "I don't imagine even prosecutors or Jackson's lawyers expect a quick verdict after such a long case."

Although Jackson wasn't seen leaving the hospital Sunday, it is believed he departed in one of two sport utility vehicles that drove slowly away from the hospital through a throng of reporters and fans. His aides had erected white scaffolding outside the emergency room entrance to block the view of photographers gathered outside.

Several people chased after the vehicles in a chaotic scene reminiscent of his court appearances and one photographer was led away by police. Olivia Kennedy, switchboard operator at the hospital, said the staff had been asked not to release any information about Jackson.

Also Sunday, the Rev. Jesse Jackson said in an interview that he has arrived in the area to meet with Jackson. "I talk to him almost every day, and we have prayer," he said. "We are going to be in prayer as we watch and wait."