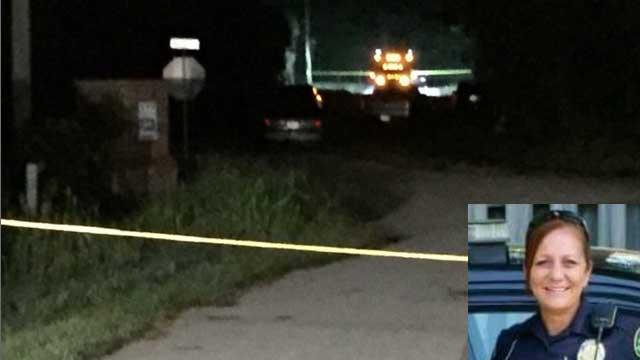 JACKSON, Ga. -- Authorities are charging a Georgia police officer with fabricating a story that she was shot by a suspect she described only as a black man.

The GBI says Hall made a police radio call early on Sept. 13, and said she had been shot. Hall said she saw a black man near a woodline while she was on routine patrol, and she approached him to ask him why he was there. He became argumentative and shot her, she claimed. She said she fired two shots at the suspect with the Glock .22 issued to her by the Jackson Police Department, but said he fled into the woods.

Hall is white. Police said previously that Hall was shot in the abdomen but her bulletproof vest protected her.

Jackson police chief James Morgan said he called in the GBI to conduct an independent investigation. According to the GBI, Hall told investigators she hadn’t turned on her police car’s video or audio recording devices. But when investigators turned up video and audio from the unit’s hard drive, they found her statements inconsistent with the recordings and other evidence.

The GBI says investigators determined she was not a victim of a shooting.

At a press conference Friday, investigators and prosecutors didn’t say whether they believe Hall shot herself, citing the ongoing investigation. But they said they do not suspect she had accomplices.

Her claim that an armed suspect was still on the loose instilled fear in the small central Georgia city of just over 5,000.  Jackson mayor Kay Pippin said she was “disappointed anyone would contribute to such fears.”

“For two weeks, the good people of the city of Jackson poured out their hearts in expressions of concern and support for what we believed to be a police officer – one of our own – harmed in the line of duty,  Pippin said.

Hall’s daughter spoke to CBS affiliate WGCL shortly after the incident, pleading for the gunman to turn himself in.

Friday, officials reassured the community there was no gunman at large.

Morgan said Hall is on paid administrative leave. She had been with the department for about three months before the incident and had been in law enforcement for about four years, Morgan said.

Officials said she had checked herself into a private facility, but wouldn’t elaborate. She was expected to be arrested and booked on the charges upon her release.