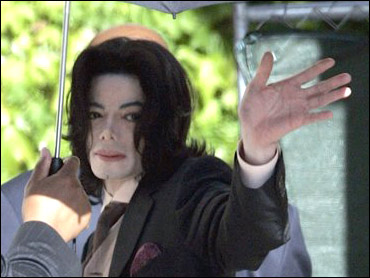 As Michael Jackson's lawyers continue to poke holes in the prosecution's child molestation and conspiracy case, two sources close to the singer told CBS News that the defense is planning on resting its case earlier than expected.

Both sources told CBS News the defense is paring down its case and may rest as early as next week, although some in the Jackson camp dispute this.

Lawyers are still negotiating terms under which talk show host Larry King would testify in the trial.

There appears to be no definitive word on Jay Leno, but it seems that he will take the stand on Tuesday as well. Chris Tucker is expected to follow those two at some time.

Also, there's still no word on whether Jackson himself will take the stand.

On Wednesday, a young cousin of Jackson testified that he saw Jackson's accuser and the boy's brother fondle themselves in a guest cottage at the singer's Neverland ranch.

The defense elicited the testimony in an apparent effort to show that the accuser engaged in sexual activity on his own.

"I said I didn't want to 'cause it was nasty," said the witness, who was 10 years old at the time.

On cross-examination by prosecutor Ron Zonen, the boy said he went to Michael Jackson's bedroom to sleep after the incident and told the pop star what the boys were watching on TV.

"He didn't believe it. He thought they were cool and they wouldn't do that," Rijo Jackson said.

"I didn't wanna like tell him 'cause I was scared," Rijo Jackson said.

Jackson, 46, is accused of molesting a 13-year-old boy in February or March 2003, plying the boy with wine and conspiring to hold him and his family captive.

Prosecutors claim the conspiracy was intended to get the family to make a video rebutting a TV documentary in which the accuser appeared with Jackson and the pop star said he allowed children to sleep in his bed but that it was non-sexual.

Rijo Jackson also testified that he once saw the boys take wine that had been delivered to Michael Jackson's master bedroom.

He said the wine was delivered to the downstairs area of the room and they offered to take it upstairs to the singer.

The witness said Michael Jackson was in a bathroom when chef's assistant Angel Vivanco brought in the wine with the cork still in the bottle. He said the brothers took the wine upstairs and that when he next saw the bottle the cork was removed and some of the wine was gone.

Rijo Jackson said he didn't tell his cousin because he wasn't sure the boys drank the wine.

Prosecutors contend Jackson gave the boys wine and showed them adult materials as a precursor to sex, but the defense contends the boys were troublesome and got those things on their own.

Rijo Jackson also testified he saw the boys steal items from drawers including money belonging to a chef. He also said he saw them run out of ranch manager Jesus Salas' office with money he believed they had taken.

The witness said he didn't tell Michael Jackson about the alleged stealing because the singer was often away. He said he did try to tell a maid about money being stolen from the kitchen.

On Tuesday, Simone Jackson, a 16-year-old cousin of the singer said she once saw the boys steal wine from a kitchen at Neverland in February 2003.

The defense on Wednesday also called Christian Robinson, who participated in interviews of the accuser's family and Jackson's former wife Deborah Rowe for the so-called rebuttal video.

Robinson said there were no scripts for the interviews, in which Rowe and the family praised Michael Jackson.

Robinson said he wrote questions for Rowe's interview but ran the camera while another man conducted the interview. He said he asked the questions during the family's interview and that their answers were spontaneous, contradicting the mother's claim that every moment was scripted.

Robinson described the mother as appearing comfortable and chatty. He said some of her comments were "a little nutty" but he found her to be a warm person.

"Was there anything that you saw that indicated she was unwilling to do the interview?" defense attorney Robert Sanger asked.

"She was adamant about wanting to do the interview," Robinson said, but he noted that she was hesitant to sign a release form that would allow the video to be aired.