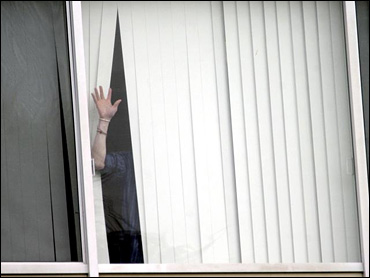 Pop star Michael Jackson was released Wednesday from a hospital where he was treated for flu symptoms, which delayed jury selection for his trial on child molestation charges.

She said Jackson's nausea and other symptoms had subsided enough for him to leave. "He's still not feeling well, but he's going to continue his recovery at home," Bain said.

"Mr. Jackson continues to be in stable condition and remains under observation at this time. He continues to need care for some persistent viral symptoms, but otherwise he's in good spirits," the doctor said.

Reporters and photographers did not see Jackson leaving, but two black SUVs pulled up to a hospital loading dock out of sight of news media, then left swiftly.

Jackson's hospitalization Tuesday caused jury selection in his child molestation trial to be delayed for a week, until Feb. 22.

Before Jackson left, his parents, Joe and Katherine, and brother Jermaine visited the hospital for several hours.

The hospital reported that Jackson was treated for a "flu-like illness with some vomiting." The treatment included intravenous fluids.

The judge made the initial announcement 15 minutes after Jackson was scheduled to appear in court at 8:30 a.m. Tuesday.

"Notice anything unusual? Mr. Jackson's not here," the judge said. He then told the court that that Jackson had been taken to the hospital.

A throng of news media covering Jackson's trial and some Jackson fans converged on the hospital, staying around the clock. On Wednesday morning, someone who resembled Jackson could be seen peeking through window blinds of one hospital room and waving.

Jackson is accused of molesting a 13-year-old boy at his Neverland ranch and plying the boy with alcohol.