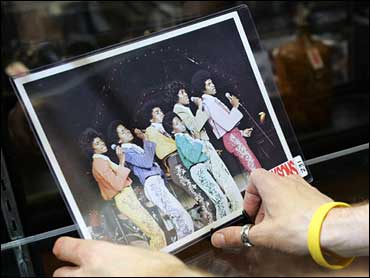 Jackson family memorabilia brought in about half a million dollars on the first of a two-day auction at the Hard Rock Hotel & Casino, auctioneer Guernsey's said Thursday. The auction, which wraps up late Thursday, displayed more than 1,100 lots, mostly costumes, documents, awards and other memorabilia.

One of the priciest items to sell was a black, military-style coat with an "M" crest that belonged to Michael Jackson. It fetched $24,000, said Guernsey's president Arlan Ettinger.

Several awards sold for similar amounts, including gold and platinum albums presented to the Jacksons for sales of "We Are the World," recorded by a group of artists known as USA for Africa. The set sold for $20,000.

Universal Express Inc., a luggage company based in Boca Raton, Fla., acquired the items in March last year from New Jersey businessman Henry Vaccaro, who took possession of them in 2002 after a failed business venture wound up in bankruptcy court.

After a last-minute court hearing held Wednesday about a confidential settlement his company reached last year about the ownership of some of the items, the company agreed to pull a dozen items so bidding could start on time, said Richard Altomare, the company's chief executive. It was not immediately clear what was disputed, or what items were pulled.

Altomare said he wasn't disappointed at the sales pace, even though his company bought the items for $5 million and spent more than $2 million transporting them.

The company's collection includes other Jackson items, such as master tapes of hundreds of songs, some never released, that will be sold later, he said.

"We have two times the number of items here still in our warehouse," he said.