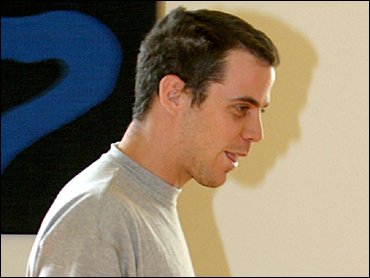 Authorities have released a star of MTV's "Jackass" arrested last week after claiming to have swallowed a condom filled with marijuana.

Stephen Glover — known as Steve-O on the defunct series on the American music channel — was released Tuesday after he agreed to pay a fine of 45,000 kronor ($5,800 U.S.), his U.S. lawyer said.

"Overall I am very pleased with the outcome of this matter." said lawyer Jason Berk. "It was unfortunate that Steve-O was detained for such a long period of time, but now he can move forward with the tour and begin shooting for his new television show."

The Stockholm district court ordered had ordered Glover held in jail until June 6 while a prosecutor prepared possible charges of drug smuggling and drug possession. Sweden has some of Europe's strictest anti-drug laws.

Glover admitted to the court that he had an ecstasy pill in his bag and had smoked marijuana in his hotel room during Saturday's hearing. He denied smuggling the drugs into Sweden and said he had only joked when he described the condom stunt to a Swedish newspaper and on his Web site.

Berk said Glover didn't know how the ecstasy pill ended up in his room.

Because he agreed to pay the fine, Glover was allowed to leave Sweden and rejoin his "Don't Try This At Home" tour.

CBSNews.com and MTV are both part of Viacom, Inc.