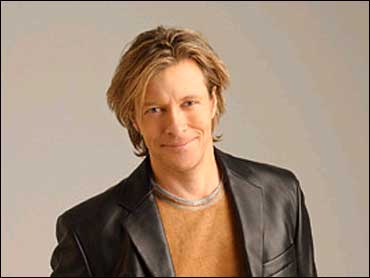 Ever since "The Bold and the Beautiful"'s sea captain Dominick Payne washed ashore after a dramatic accident, the world of the Forresters and the Marones has been turned upside down.

Jack Wagner stars as Payne, who is also the long-lost son of powerful businessman Massimo Marone.

Going back on the soaps after being away for more than a decade is like "riding a bike," Wagner tells The Early Show co-anchor Hannah Storm. "I love the work and my background is theater. I kind of went into soap opera with 'General Hospital' in the '80s. It's like theater because every day it's a new script, which really doesn't have a beginning, middle or end like a play or a movie script. So you have to be on your toes and bring it every day. And you have to be spontaneous, which is really how I like to work."

And the producers say he has been quite involved in every aspect of his character. He even decided he should have a tattoo, and grow a burly beard. He says, "I think it's fun to change your looks because on television you don't get to do it as much as film actors do for certain parts."

What has not changed is his passion for music as well. Like he did with "General Hospital," he is incorporating singing into his acting. Wagner has just written a new song for "The Bold and the Beautiful," which debuted on the program Jan. 23. The song, "Going Back Again," is already the cornerstone of CBS promotions for Daytime.

An accomplished singer, Wagner has had 3 top 40 songs and a former No.1 song, "All I Need."

Wagner says, "I was fortunate enough to hook up with Quincy Jones and had a lot of success. But the music of the '80s really changed when the '90s hit. For me to chase that dream or career of music, I started a family, started on 'Melrose Place,' so it was something I didn't have the time or energy. Reality set in and said, 'Music, I had that phase in my life.' And Brad Bell, the producer of 'Bold and the Beautiful' said, 'What do you think if we introduce music into this character? I said, 'The singing sea captain? I know Frisco Jones, the singing beat cop.' But I started playing a little acoustic guitar as a backdrop of the character when he's out at sea. Slowly, we've introduced it."

Now he is in the middle of recording an album. And he says, "I just finished with Jeff Pescetto. We haven't worked in a while and he's probably the top producer. It's like being back with old friends. I heard Randy Jackson speaking earlier about how he feels about his life right now and I really couldn't do this or write the music that I just heard without it really being personal."

So why is "Going Back Again" personal? Wagner says, "It's about my life in the last three years that fits perfectly in this story line. So it's one of those things that I really believe now the music I used to sing was really formula and commercial. This is more personal. And I hope people will hear that and it will mean something."

Wagner's other great passion is golf.

Some facts about Jack Wagner: