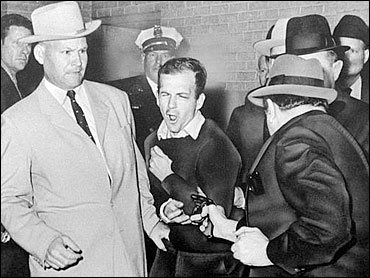 The $16.50 gray fedora worn by Dallas strip club owner Jack Ruby when he fatally shot Lee Harvey Oswald in 1963 is for sale.

Heritage Auctions scheduled an auction Saturday for the Cavanagh fedora.

President John F. Kennedy was slain on Nov. 22, 1963. Oswald was arrested for the assassination. Ruby fatally shot Oswald on Nov. 24, in an attack captured during a live TV broadcast as the suspected assassin was being escorted by law officers.

Ruby was convicted of killing Oswald and sentenced to death, but was appealing when he died of cancer in 1967.

The auction house estimates the fedora, with Ruby's name embossed inside in gold and the cost of the hat, will sell for more than $35,000.