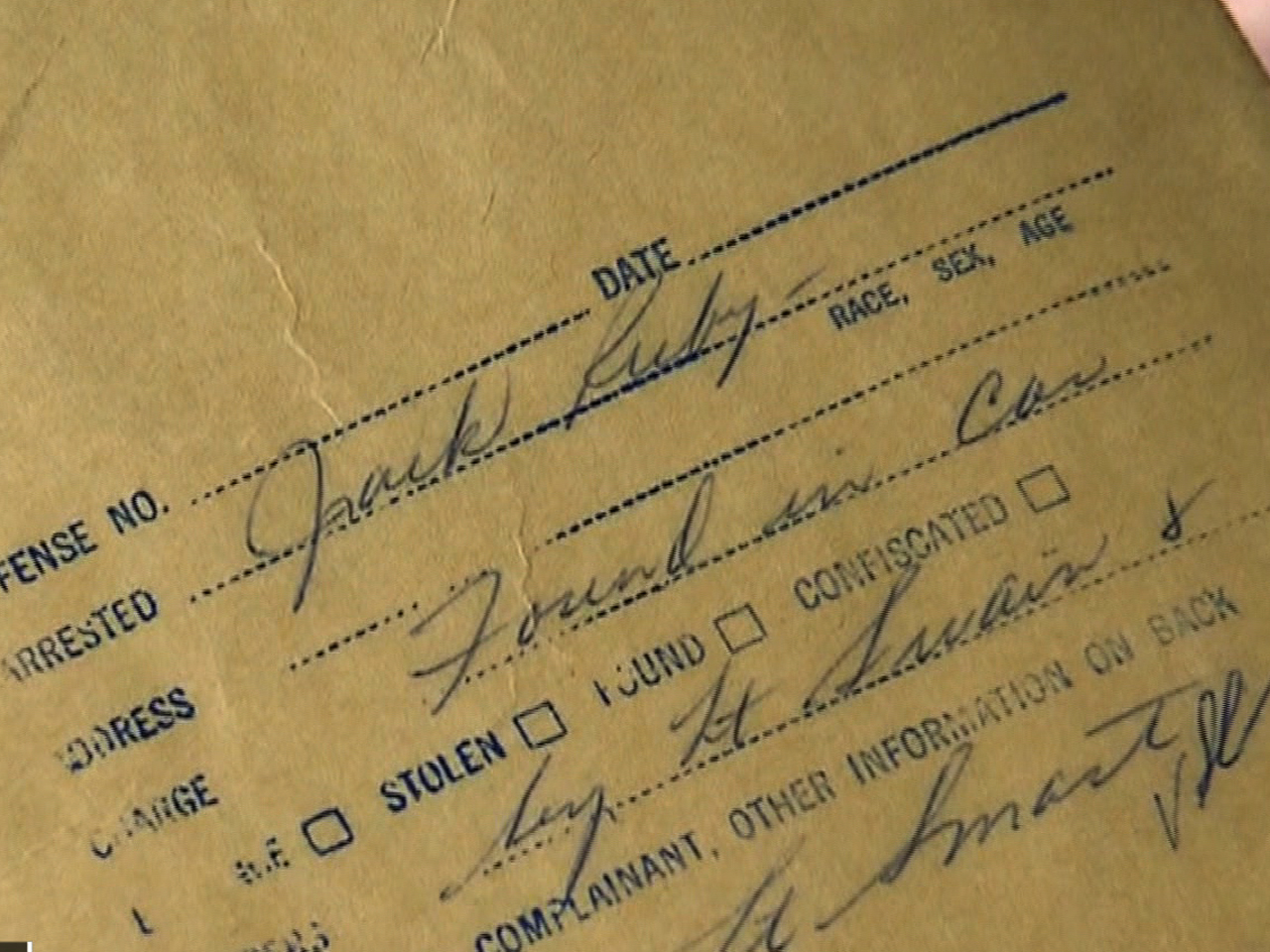 The days that followed President John F. Kennedy's assassination were filled with questions. Now, nearly 50 years later, we're learning new answers about Jack Ruby, the man who gunned down Lee Harvey Oswald, from boxes upon boxes of documents and artifacts from the Dallas County district attorney's prosecution of Ruby in 1964.

"CBS This Morning" was allowed exclusive access to comb through those boxes. Among the items: Ruby's gun holster and the aluminum brass knuckles he carried, along with membership cards from his nightclub, The Carousel Club - and even photo cards of one of his better-known strippers, Jada. Many items have never been seen before publicly.

Retired insurance investigator Dave Perry has studied the Kennedy assassination for more than 40 years. CBS News asked him to help examine the files. Perry said, "This is a virtual treasure trove that literally gets into the mind of Jack Ruby."

The lie-detector document shows Ruby was asked, "Did you shoot Oswald to save Mrs. Kennedy the ordeal of trial?" He said, "Yes."

And some documents may settle longstanding questions about how Ruby was able to shoot Oswald as he was being led out of Dallas Police headquarters.

The day Oswald was shot, Dallas Police Officer Roy Vaughn was on duty, guarding the garage ramp, when Ruby somehow slipped past and shot Oswald minutes later. Some later speculated Vaughn might have let Ruby in on purpose - a suggestion that bothered him for decades.

Nancy Kennemar, Vaughn's daughter, said her father felt like his integrity was questioned. She said, "He said that later in some interviews. He said, 'That's one thing you don't want taken away from you is your integrity.'"

But Perry says a document from these files should put those suspicions to rest. It's a memo from the Dallas County district attorney at the time, Henry Wade, indicating that, while being interviewed, Ruby told Wade when he slipped down the ramp, "the officer (Roy Vaughn) did not see him." What's more, other documents indicate Ruby didn't even know Vaughn's name.

Asked if she feels like the officer's name can be cleared, Perry said he would "absolutely be vindicated by this."

Vaughn never saw those documents. The 30-year law enforcement officer, who went on to serve as a police chief, died in 2010. Kennemar said, "I wish my dad were alive and he knew about this because even though I trust that he was innocent of any wrongdoing, I think that it would mean something to him to see this paperwork."

Dallas County District Attorney Craig Watkins gave CBS News the first public access to those files in 50 years, and he said he hopes this new information will provide a better view of history. He's loaning some of the artifacts and documents from the files to the Sixth Floor Museum in Dallas.

Watkins said the 12 boxes of artifacts and documents had sat for years in a warehouse. Watkins said he wanted the items in the boxes to be made available to the public because of the possible historical significance. Watkins said, "I would imagine when a historian has the opportunity to go through all these documents, they will find little nuggets of jewels they can use to give an explanation of the times back in 1963. ... It's an opportunity for us to get a better explanation of how times were, not just in Dallas, but in this country."