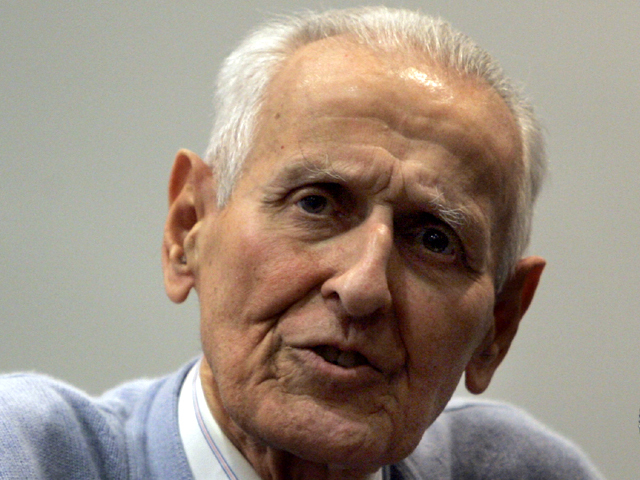 DETROIT - Jack Kevorkian, the audacious, fearless doctor who spurred on the national right-to-die debate with a homemade suicide machine that helped end the lives of dozens of ailing people, died Friday at a Detroit-area hospital after a brief illness. He was 83.

Kevorkian died about 2:30 a.m. at William Beaumont Hospital in Royal Oak, close friend and prominent attorney Mayer Morganroth said. He had been hospitalized since last month with pneumonia and kidney problems.

The retired pathologist, who said he injected lethal drugs that helped some 130 people die during the 1990s, likened himself to Martin Luther King and Gandhi and called prosecutors Nazis, his critics religious fanatics. He burned state orders against him, showed up at court in costume, called doctors who didn't support him "hypocritic oafs" and challenged authorities to stop him or make his actions legal.

(In 2007, Jack Kevorkian gave his first interview after his release from prison to "60 Minutes" correspondent Mike Wallace.)

"The issue's got to be raised to the level where it is finally decided," Kevorkian said during a broadcast of CBS' "60 Minutes" that aired a Lou Gehrig's disease patient's videotaped 1998 death as Kevorkian challenged prosecutors to charge him in the case that eventually sent him to prison.

Experts credit Kevorkian, who insisted that people had the right to have a medical professional help them die, with publicizing physician-assisted suicide. Even so, few states made it legal. Laws went into effect in Oregon in 1997 and Washington state in 2009, and a 2009 Montana Supreme Court ruling effectively legalized the practice in that state.

"Somebody has to do something for suffering humanity," Kevorkian once said. "I put myself in my patients' place. This is something I would want."

People who died with Kevorkian's help suffered from cancer, Lou Gehrig's disease, multiple sclerosis, paralysis. They died in their homes, an office, a Detroit island park, a remote cabin, the back of Kevorkian's van.

An official cause of death for Kevorkian was not immediately determined, but Morganroth said it likely will be pulmonary thrombosis, a blood clot.

"I had seen him earlier and he was conscious," said Morganroth, who added that the two spoke about Kevorkian's pending release from the hospital and planned start of rehabilitation. "Then I left and he took a turn for the worst and I went back."

Nicknamed "Dr. Death," Kevorkian catapulted into public consciousness in 1990 when he used his homemade "suicide machine" in his rusted Volkswagen van to inject lethal drugs into an Alzheimer's patient who sought his help in dying.

For nearly a decade, he escaped authorities' efforts to stop him. His first four trials, all on assisted suicide charges, resulted in three acquittals and one mistrial.

(At left, watch "60 Minutes" correspondent Mike Wallace interview Jack Kevorkian in 2007 after his release from prison.)

Murder charges in earlier cases were thrown out because Michigan at the time had no law against assisted suicide; the Legislature wrote one in response to Kevorkian. He also was stripped of his medical license.

Devotees filled courtrooms wearing "I Back Jack" buttons. But critics questioned his publicity-grabbing methods, aided by his flamboyant attorney Geoffrey Fieger until the two parted ways before the 1999 trial in which he was convicted of second-degree murder.

"I think Kevorkian played an enormous role in bringing the physician-assisted suicide debate to the forefront," Susan Wolf, a professor of law and medicine at University of Minnesota Law School, said in 2000.

"It sometimes takes a very outrageous individual to put an issue on the public agenda," she said, and the debate he engendered "in a way cleared public space for more reasonable voices to come in."

In a rare televised interview from prison in 2005, Kevorkian told MSNBC he regretted "a little" the actions that put him there.

"It was disappointing because what I did turned out to be in vain. ... And my only regret was not having done it through the legal system, through legislation, possibly," he said.

Kevorkian's ultimate goal was to establish "obitoriums" where people would go to die. Doctors there could harvest organs and perform medical experiments during the suicide process. Such experiments would be "entirely ethical spinoffs" of suicide, he wrote in his 1991 book "Prescription: Medicide -- The Goodness of Planned Death."

His road to prison began in September 1998, when he videotaped himself injecting Thomas Youk, a 52-year-old Lou Gehrig's disease patient, with lethal drugs. He gave the tape to "60 Minutes."

(At left, watch the tape Jack Kevorkian provided to "60 Minutes." Please note that the video might offend some viewers.)

Kevorkian acted as his own attorney for most of the trial. He told the court his actions were "a medical service for an agonized human being."

In his closing argument, Kevorkian told jurors that some acts "by sheer common sense are not crimes."

"Just look at me," he said. "Honestly now, do you see a criminal? Do you see a murderer?"

The U.S. Supreme Court twice turned back appeals from Kevorkian, in 2002, when he argued that his prosecution was unconstitutional, and in 2004, when he claimed he had ineffective representation.

Kevorkian was freed in June 2007 after serving eight years of a 10- to 25-year sentence. His lawyers had said he suffered from hepatitis C, diabetes and other problems, and he had promised in affidavits that he would not assist in a suicide if he was released.

In an interview at the time, Youk's brother Terrence said his brother received "a medical service that was requested and, from my point of view, compassionately provided by Jack. It should not be a crime."

But Tina Allerellie became a fierce critic after her 34-year-old sister, Karen Shoffstall, turned to Kevorkian in 1997. She said in 2007 that Shoffstall, who suffered from multiple sclerosis, was struggling with depression and fear but could have lived for years longer.

"(Kevorkian's) intent, I believe, has always been to gain notoriety," Allerellie said.

In 2008, Kevorkian ran for Congress as an independent, receiving just 2.7 percent of the vote in the suburban Detroit district. He said his experience showed the party system was "corrupt" and "has to be completely overhauled from the bottom up."

Born in 1928, in the Detroit suburb of Pontiac, Kevorkian graduated from the University of Michigan's medical school in 1952 and became a pathologist.

Kevorkian said he first became interested in euthanasia during his internship year when he watched a middle-aged woman die of cancer. She was so emaciated, her sagging, discolored skin "covered her bones like a cheap, wrinkled frock," Kevorkian wrote.

After building a suicide device in 1989 from parts he found in flea markets, he sought his first assisted-suicide candidate by placing advertisements in local newspapers. Newspaper and TV interviews brought more attention.

On June 4, 1990, he drove his van to a secluded park north of Detroit. After Janet Adkins, 54, of Portland, Ore., met him there, he inserted a needle into her arm and, when she was ready, she flipped the switch that released a lethal flow of drugs.

He later switched from his device to canisters of carbon monoxide, again insisting patients took the final step by removing a clamp that released the flow of deadly gas to the face mask.

Kevorkian's life story became the subject of the 2010 HBO movie, "You Don't Know Jack," which earned actor Al Pacino Emmy and Golden Globe Awards for his portrayal of Kevorkian. Pacino paid tribute to Kevorkian during his Emmy acceptance speech and recognized the world-famous former doctor, who sat smiling in the audience.

Pacino said during the speech that it was a pleasure to "try to portray someone as brilliant and interesting and unique" as Kevorkian and a "pleasure to know him."

Kevorkian himself said he liked the movie and enjoyed the attention it generated, but told The Associated Press that he doubted it would inspire much action by a new generation of assisted-suicide advocates.

"You'll hear people say, 'Well, it's in the news again, it's time for discussing this further.' No it isn't. It's been discussed to death," he said. "There's nothing new to say about it. It's a legitimate ethical medical practice as it was in ancient Rome and Greece."

Kevorkian's fame -- or notoriety -- also made him fodder for late-night comedians' monologues and sitcoms. His name became cultural shorthand for jokes about hastening the end of life.

Even admirers couldn't resist. Adam Mazer, the Emmy-winning writer for "You Don't Know Jack," got off one of the best lines of the 2010 Emmy telecast.

When asked in 2010 how his own epitaph should read, Kevorkian said it should reflect what he believes to be his "real virtue.

"I am quite honest. I have trouble lying. I don't like people who lie."