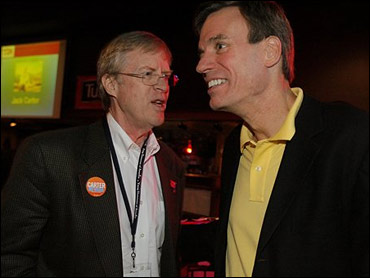 U.S. Senate candidate Jack Carter called on young Democrats on Sunday to be active in the blogosphere to raise money for his campaign against incumbent Republican Sen. John Ensign.

After plugging his own Web site and MySpace.com home page, Carter, the eldest son of former President Jimmy Carter, told about 100 people attending a Young Democrats of America conference that they could help him win.

"If you and your MySpace friends get five people apiece ... Democrats will win in 2006," he said.

The 58-year-old investment consultant touched on key Democratic themes ahead of the November elections: dissatisfaction with the Iraq war, high government spending and criticism of the Bush administration.

"It is 2006 and we are a nation at war with no plan for victory. We are a nation too polarized to solve our problems, a nation wallowing in debt and a nation whose leadership has forgotten whom they represent," he said.

At last reporting in mid-April, Ensign had a war chest six times as large as Carter, who had more than $400,000 on hand, and a healthy lead in the polls.

Carter has never run for political office before, but he's not a total newcomer to the game, having been heavily involved in his father's successful campaign for president.

The pitch to use MySpace is a bit similar to one tactic that served the Carter campaign well back in 1976: the candidate, who was relatively unknown, did his best to get grassroots support by phoning numerous individual radio and newspaper newsrooms across the country, ready to comment on whatever issues happened to be in the headlines that day.

Like his father before him, Jack Carter, 58, worked in the family peanut business, went to Georgia Tech and served in the Navy. After law school at the University of Georgia, he became active in the Carter campaign and went on to a financial career - specializing in hedge funds.

Former president Jimmy Carter and his wife, Roslyn, were by Jack Carter's side this February when he announced his bid for office, proclaiming "common sense, honesty, integrity and a desire for good government" as the American values to which he subscribes.

The younger Carter also sent a shot across the bow at his opponent, claiming Ensign "works for the Bush administration" and his own intention is to work for the people of Nevada.