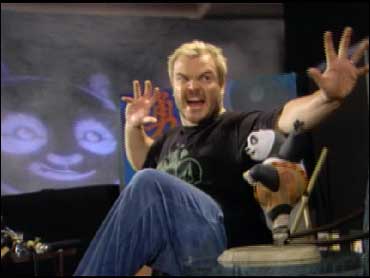 Actor Jack Black is a man of many talents.

He launched his career more than a decade ago as one half of the satirical rock group Tenacious D.

He went on to land a handful of memorable roles in films like "High Fidelity" and "School Of Rock." His latest undertaking is the new animated film "Kung Fu Panda" where he voices Po, a roly-poly panda whose mission to become a kung fu master gets off to a very rocky start.

Black stars opposite Dustin Hoffman in the film, who voices Shifu, a red panda who becomes Po's teacher. The actors did most of their work alone in a studio, as is typical of animated films, but Black and Hoffman did have one scene together.

Photos: "Panda" Bares All On Screen

But, Black said he didn't mind all the solo work.

"I like the isolation chamber. Everyone is focused on my magical sauce," he said. "I go crazy physical. I find it gets all the sounds right. If you're doing karate, it doesn't sound right if you're just like 'ki-ya.' It helps to bring out the performance. I think you can see the difference."

Black said that this character is closer to his real personality than any of the roles he's done in the past.

"In 'Shark Tale' I played a nebbishy New York Woody Allen voice," he said. "And this time the boss said 'we want you just to be you.' I am going to bring the real me. And I poured my soul into this panda bear."

"Kung Fu Panda" has received overwhelmingly good reviews, with the New York Times praising the film's animation and calling it "high concept with a heart."

For Black, it's a chance to portray a character who's driven by his dreams of greatness.

"He dreams of being a kung fu warrior, one of the Furious Five, the greatest kung fu practitioners in all of China," he said. "And he has to believe in himself. Because it's a long, difficult road."

What Are America's Best Hospitals?