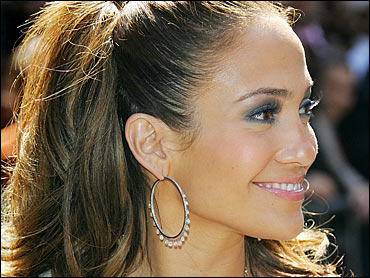 Jennifer Lopez was awarded nearly $545,000 in a lawsuit against her first husband over his plans to publish a tell-all book claiming she had several affairs.

A court-ordered arbitrator made the decision in April in Lopez's breach-of-contract suit against Ojani Noa, court papers filed Monday indicated. The figure includes only $200,000 in damages, with the rest going for arbitration costs and attorney's fees.

Lopez's suit claimed that Noa had violated a previous lawsuit settlement preventing him from revealing private information about their relationship.

The arbitrator also decided that a permanent injunction should be awarded against Noa that would bar him from "criticizing, denigrating, casting in a negative light or otherwise disparaging or causing disparagement" to Lopez.

Noa also would be directed to give the singer-actress or her attorney all copies of materials related to the book.

The arbitration decision was disclosed on Monday, when Lopez's attorney filed papers asking a judge to confirm the award. A hearing in the case was scheduled for Sept. 5.

A call to Lopez's attorney, Paul N. Sorrell, was not immediately returned Wednesday.

Noa, 31, and Lopez, 36, married in February 1997 and were divorced 11 months later. Noa's unpublished, ghostwritten book alleges that during that time Lopez had multiple affairs, including one with her third and current husband, Marc Anthony, court documents indicated.

Her lawsuit claimed that Noa offered not to publish the book in return for $5 million.

In 2004, Noa sued his ex-wife for breach of contract, claiming she lured him into taking a $1,000-a-week managerial job at her Pasadena restaurant, Madre's, then fired him five months later.

Noa settled the case for $125,000 and agreed not to disclose private information about their relationship or to disparage Lopez, according to court papers.