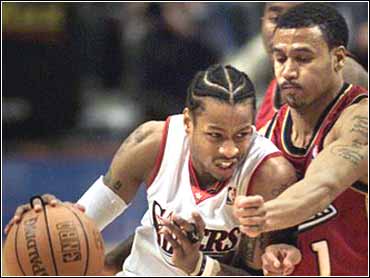 Allen Iverson and Jerry Stackhouse proved why they couldn't play together.

Stackhouse had 34 points on 12-for-32 shooting, while Iverson was 14-for-29. Stackhouse, the No. 3 overall pick in the 1995 draft by the Sixers, was traded to Detroit for Theo Ratliff and Aaron McKie in December 1997 because he didn't fit in with Iverson on the court.

"Stack kept shooting the ball and a player like him, if he's missing, eventually he'll get on," Iverson said. "He hit some big shots. But the key was we played good defensively."

Stackhouse, the NBA's leading scorer at 30.0 points per game, looked like he had something to prove to his old team early on. He took 13 shots in the first quarter and missed seven straight before hitting a jumper midway through the second.

"That was the furthest thing from my mind," Stackhouse said about a shootout with Iverson. "I was just concentrating on trying to win the game."

George Lynch added 14 points and 13 rebounds for the Sixers, who improved to 16-1 when scoring more than 100 points. Ratliff had 13 points and Tyrone Hill dded 13 rebounds.

Joe Smith had 15 points and Chucky Atkins added 11 for Detroit.

Philadelphia took the lead for good with a 12-0 run over a four-minute stretch from the first quarter into the second. Iverson had six points during the run on a pair of running jumpers and a 21-footer.

"We've come out and had some letdowns at home based on the way we've played on the road," Sixers coach Larry Brown said. "Everybody realizes we have to play the right way. We have to get it from a lot of different sources."

Detroit got as close as four on two free throws by Smith late in the third, but Iverson responded. He hit a jumper and made two free throws for a 75-67 lead less than a minute into the fourth.

After Stackhouse made a jumper, McKie hit a jumper and Iverson sank two free throws to make it 79-69. The Sixers then put it away with an 8-3 run, including six points by reserve center Todd MacCulloch.

The 7-footer came off the bench late in the third quarter and made a layup and a short jumper, giving the Sixers an 86-72 lead with 7:02 left.

Detroit didn't get closer than 11 the rest of the way.

"We've been consistent on the road, but we've relaxed too much at home and teams snuck up on us," Lynch said. "When you play teams low in the standings, you have to go out fast and let the other guys get in."

"I always took free throws for granted because it's an easy shot, nobody has a hand in your face," Iverson said. "I never really concentrated and now I'm making a conscious effort to make the free throws."