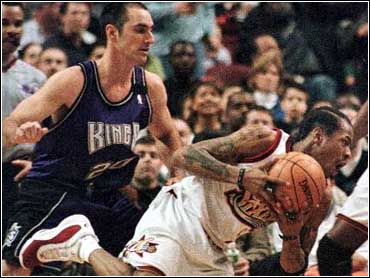 The last time he did it, people had a problem with it.

This time, it was a milestone that showed how much things have changed.

Iverson tied his career high and made a mockery of his showdown with Sacramento's Jason Williams as the 76ers beat the Kings 119-108.

Iverson's performance was reminiscent of the one in Cleveland three years ago when he put up 50 in the city where he was booed during the rookie game at All-Star weekend.

Now, his team is in position to make the playoffs for the second straight season after an eight-year drought, and Iverson is finally shedding his reputation as a selfish showman who cares only about stats.

He was roundly criticized for his string of 40-point games as a rookie, accused of padding his stats in a push for the Rookie of the Year award which he won.

Iverson's response this time: "I don't mind taking 40 shots. That's what I do."

"I played that game like it was my last when I was a rookie and scored 50," said Iverson, who equaled the most points scored in the NBA this season. "I did the same thing tonight, just like I do every night. And we won."

Iverson, approaching his first All-Star game, had a slew of incredible numbers: A career-high 20 field goals and 40 attempts, nine rebounds and six assists.

He favorite stat was the one that goes in the standings. Unlike his other 50-point game, the Sixers won.

Williams, the Kings' flashy point guard, had 14 points on 5-for-16 shooting and was not a factor in the outcome or the highlight reel.

Both realms belonged to Iverson, who scored 50 fothe first time since he became the first rookie since Wilt Chamberlain to have four straight 40-point games. He had 50 on April 12, 1997, in a 125-118 loss to Cleveland.

"He took 40 shots?" said an incredulous Chris Webber, who led Sacramento with 32 points and 15 rebounds. "He made a lot of them, though."

"I played with Rick Barry, and a lot of guys would mumble about the number of shots he takes," Brown said. "And his remark was, 'Half you guys can't get 40 shots.' And I think it's justified. I think it's a remarkable thing that Allen can do that most nights and not look like he lost anything."

It was quite a show witnessed by Philadelphia's fourth sellout crowd this season including comedian Bill Cosby and a national TV audience.

"It's nice to see Allen play well in a TV game," Brown said. "There was a time we were never on it, and the reason we're on it now is because we've won a couple of games and Allen's on the team."

Webber fouled out on a dizzying play that produced the two free throws that gave Iverson 50 points. With Philadelphia leading 107-102 and Iverson sitting on 48 points, he knifed into the lane and got his shot blocked as the clock approached the one-minute mark. Eric Snow clapped for him to give up the ball, but Iverson went back into the lane and drew Webber's sixth foul.

Brown motioned to his star with two hands to settle down. After a timeout, Iverson sank both free throws to hit 50 points, giving the Sixers a 109-102 lead with 1:37 left.

Snow had 11 points, 13 assists and no turnovers in what Brown,a former point guard, called "about the best game a point guard can have."

Iverson also hit 50 at the foul line three years ago in Cleveland, but under very different circumstances. He'd been booed when winning the rookie game MVP trophy in Cleveland, and was booed again on that April night. The Sixers were on their way to a 22-60 season.

Iverson had been so worried about the crowd reaction he'd receive in Cleveland that he called his mother, Ann, and told her not to attend the game. He said those thoughts were far away Sunday.

"I wasn't even paying attention," Iverson said. "I was just playing my game."