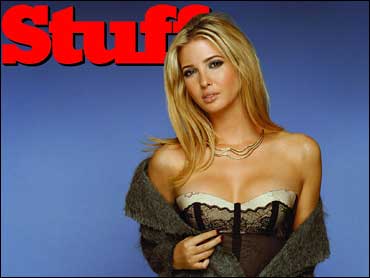 There are a great many things that set Ivanka Trump apart from other rich girls, like say Paris Hilton.

"I like to have fun with my friends and go out at night, but you're not going to find me dancing on top of tables or see me trashed outside of Bungalow 8," Ivanka Trump says in the new issue of Stuff magazine.

In addition, the words "that's hot" don't seem to be part of the Wharton Business School grad's vocabulary.

"I want to earn the respect of the people I work with," says Trump, who is the VP of Real Estate Development at her father's Trump Organization. "Right now it's all about creating a track record for me – working hard, having successful projects, really rolling out the hotel division internationally. The idea of coming in at nine and leaving at seven is not something I do. I work much harder than that."

The 24-year-old stunner, the eldest daughter of real estate mogul Donald Trump and his first wife, Ivana, says she can identify with the "Apprentices" on her father's hit reality show, on which she frequently guest stars.

"My brothers and I are the real apprentices; we've been groomed our whole lives to do this," she says. "He made it very clear that if we didn't live up to what he thought was our potential, he would fire us. But I'm OK with that, because he didn't get to where he is by letting people slide by."

2
While she admires her dad's work ethic, she's certainly got a mind of her own. "He has very strong opinions – which I try not to listen to," she says.

When a new boyfriend is on the scene, Ivanka says she tries to keep him from meeting her dad as long as possible. "He's really a laid-back, mellow guy, but people have a level of anxiety prior to meeting him," she says. "He hasn't threatened bodily harm to any of the people I've dated. Well, as far as I know."

If The Donald had his way, his little girl would be dating an athlete. "He's always wanted to be an athlete," she says. "He's into guys' guys. But when he starts talking about it, I stop listening."

For her part, Ivanka seems to be attracted to the deep, dark, silent types. "I love Joaquin Phoenix. He has a very sexy thing going," she tells Stuff. "I don't go for the typically handsome guy. Although I love Christian Bale; I think he's sort of an Adonis."