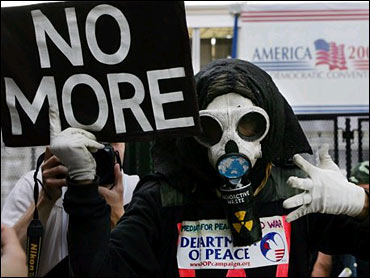 
A few thousand protesters, marching through Boston under heavy security on Sunday – the day before the opening of the Democratic National Convention – might seem to be walking on the margins of the 2004 campaign.

But what united and divided the crowd that made its way from Boston Common to the FleetCenter – estimated by authorities at 2,500 – might end up being central to John Kerry's effort to channel displeasure with the Bush administration into votes, and even votes in swing states like Maine and New Hampshire.

While a potpourri of causes fueled the crowd — from supporting ousted Haitian President Jean-Bertrand Aristide to repealing the Patriot Act — opposition to the Iraq war fused the disparate parts.

As the crowd trod forward under the watch of heavily armored state troopers, the most popular sign was "Support Our Troops: Bring Them Home." It was the favorite chant, as well, and the leading thought on people's minds.

"I'm here because I'm against the war," said Frank Lavine, an 80-year-old World War II veteran from Boston, who also fought with a Palestinian brigade against the British in 1947. "Because war is a racket."

"It's ridiculous," said Pat Galloway of Maine. "We were lied to. We were manipulated into going into war."

Despite the war's importance as a campaign issue and a policy matter, the Democratic platform does not take a position on whether the 2003 invasion was justified.

"People of good will disagree about whether America should have gone to war in Iraq," the platform reads. Both Kerry and running mate John Edwards voted for the resolution authorizing the use of force.

The protesters seemed unified in regretting those "yes" votes, but they displayed a spectrum of opinions on whether the party's position on Iraq – and its nominees' votes – will affect their vote in November.

And in the age of tight elections and third-party threats, the sentiments of anti-war voters may not be so easily dismissed, particularly in two of the states represented at Sunday's march: Maine and New Hampshire.

But she added: "If I have a choice between Bush and Kerry, I'm absolutely going to vote for Kerry." She stresses, though, "it's a vote against Bush, not a vote for anybody."

William Cavanaugh had a similar take.

"I'm going to vote for Kerry because I don't see any alternative," said the veteran of more than 30 years of active and reserve service in the Army engineers. He feels that if elected, Kerry will change tack in Iraq, or at least secure more international help.

"He will come up with a plan that will assure the Iraqi people that we will be out by some date certain," said Cavanaugh, marching with Veterans For Peace, a group that held a national conference in Boston this weekend and apparently told its members to take the same position Cavanaugh has adopted: Kerry is the only chance.

Others weren't sold. Linda Windforest of California suspects Kerry would increase the number of troops in Iraq. She was not alone: A sign at the rally read "Money for war, not for schools … send more troops to Iraq … vote Kerry."

"I'm not voting Skull & Bones at all," Windforest, whose Navy veteran father is buried at Arlington National Cemetery, said, a reference to the Yale fraternity to which both President Bush and Kerry belong. Others shared agreed, one saying Kerry's Iraq policy might be more dangerous because it is "seductive."

"I don't know," said Lavine, then admitting, "It's anybody but Bush at this moment. Bush got us into this goddamned thing."

While some onlookers lined the march site and the media trailed along, the main audience for the protest was the large security contingent.

State police marched to the demonstration route in groups of about 15, two abreast, in lock-step, wearing helmets, thick chest protectors and knee and forearm pads. City police and other state cops as well as undercover officers kept watch. A reserve unit of police, some with horses, waited in the shadows of an archway under the Massachusetts Statehouse.

Near the FleetCenter, military police walked the grounds and the elevated train tracks above. The Joint Information Center would not say how many officers patrolled the event. As of 3:30 p.m., there had been no arrests.

Despite the march occurring a day before the convention opens, participants said it had meaning.

"If we're not marching, what else are you doing?" asked Jennifer Murray of California.

"I mean the delegates are here. We're trying to express our hopes, wishes," Galloway said. "We're hoping that someone will listen to us."

So were others. As the march wound away from the FleetCenter, the pavement was chalked with slogans like "Abortion is murder" and "Choose life."