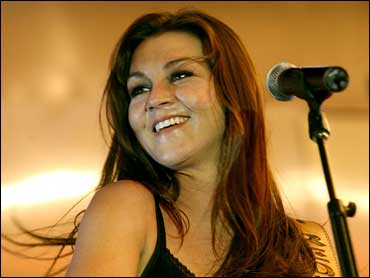 She was an "amazing talent," a young singer with a wonderful voice who wrote beautiful songs. But she was no beauty, plus flat-chested and overweight to boot.

Gerson might feel even worse after Wednesday night's exit of the matronly Melinda Doolittle from "American Idol." In today's music industry, Plain Janes need not apply. Sex appeal was once considered a bonus for a woman; now it's practically a requirement.

Doolittle and the heavyset, gap-toothed LaKisha Jones were widely considered this season's most talented "Idol" contestants. Yet both were eliminated from the final four in favor of Blake Lewis, who makes the teen girls swoon, and the long-locked, 17-year-old looker Jordin Sparks.

The only two in the Top 40 who might not be considered perfect 10s: Pink, who is still svelte and appealing; and multiplatinum Grammy-winner Kelly Clarkson, who got her break only through winning the democratically elected "American Idol."

When asked whether a female with so-so looks and sex appeal could get a record deal, Gretchen Wilson quickly replied: "They can't."

"I believe that very few will get through and they better be amazing," Wilson said in an interview. "The music is not about just music anymore, it's about the look, the 'it' factor if you will ... it's marketing."

True, looks have always been a part of the music business: Diana Ross played a model in the movie "Mahogany," Marianne Faithfull was considered a beauty, Tina Turner's legs were part of her sex appeal, Olivia Newton-John was the lovely girl-next-door and Stevie Nicks rocked teenage boys with more than just her guitar.

But there also were stars like wild-haired, pudgy Janis Joplin and Barbra Streisand, who challenged beauty standards with her protruding nose. Even curvy Aretha Franklin was known mainly for her one-of-a-kind voice.

Today, it's hard to find a singer larger than a size 6 and without a sexy look — all of which are played up with sensuous videos, modeling spreads and provocative magazine covers. Lavigne, who once scoffed at singers who stripped for the cameras, fronts the new issue of Blender topless save for a strategically placed banner that reads "Hell Yeah, I'm Hot!"

The hit reality show "Pussycat Dolls Present: The Search for the Next Doll" is a striking example. In finding a replacement for current lead doll, stunner Nicole Scherzinger, the judging panel — which included the cosmetically enhanced rapper Lil' Kim — did talk about vocal qualities. But while a few contestants had strong voices, all were taut, toned and sexy, and the focus was more on their dancing and overall desirability. Which is to be expected from the group responsible for the anthem "Don't Cha" (as in, "don't cha wish your girlfriend was hot like me?").

Even singers who are heralded for their talent are gorgeous, like Alicia Keys, Corinne Bailey Rae or Norah Jones. And while critically acclaimed Amy Winehouse may not win any beauty contests, her songs have a raw sexuality that give her that "it" factor.

Dolly Parton, whose buxom figure sometimes overshadowed her talent as a songwriter and singer, said being "a good looking woman certainly can't hurt you any if you're trying to make it."

"But I would like to believe that true and great and pure talent will rise above whatever else," the country legend said in an interview. "But certainly in music these days, the better you look, the more apt you're going to get a contract.

"It's a damn pity, though, that people have to judge real talent on looks."

Gerson says the way female artists look reflects our society, where women are constantly judged on their appearance and oversexualized. But she also says it reflects the way we listen to music these days — or don't listen.

"They have to look hot and sexy in these videos," says Gerson, who is credited with helping discover Alicia Keys, among others, and is now executive vice president of the U.S. Creative division of EMI Music Publishing.

"In the days of Aretha Franklin, people saw Aretha maybe a couple of times a year," she said, "but you listened to a record without a visual. You didn't watch it. Everything today, you watch it."

And that notion, according to Wilson, "totally sucks."

"My favorite singers in the world were Patsy Cline and Loretta Lynn, and Patsy was a large woman, and Loretta — she was never some kind of a supermodel, but they were the greatest female voices in country music, and they changed lives and they made a difference," says Wilson, who, although considered sexy, feels she doesn't fit today's beauty standards.

Where are the Patsy Clines of today? More often than not on smaller, underground labels, which put more of a premium on talent. And with the devolution of today's music industry, Gerson says, small labels may be the best path to success for a woman who doesn't look like a mold of a Barbie doll.

So how would Gerson advise the flat-chested, overweight, amazingly talented singer to chase her dream? Put out her own music and promote herself on the Web.

"As far as we've come as women," Gerson asked, "where are we really?"
By Nekesa Mumbi Moody