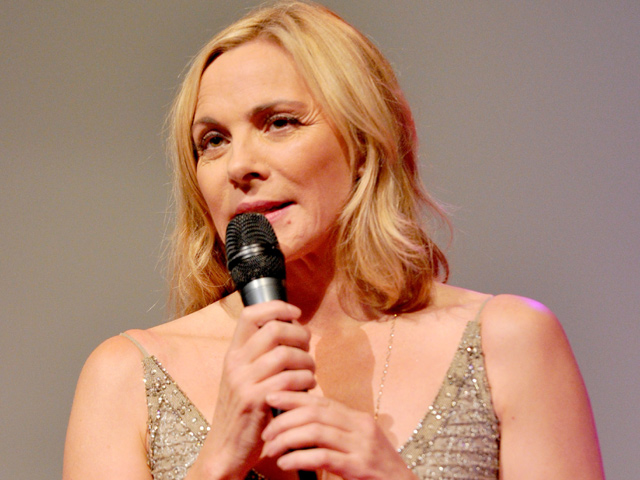 (CBS/AP) Actress Kim Cattrall has been politely trying to shake off her "Sex and the City" character, the  man-eater Samantha Jones,  and remind people that she's also a veteran theater actress.

The 55-year-old actress steps into a role played by such respected actresses as Gertrude Lawrence, Maggie Smith and Elizabeth Taylor.

It's the tale of a divorced couple who discover they have adjoining rooms while honeymooning with their new spouses and rekindle their romance. Cattrall stars opposite Paul Gross, star of the TV shows "Due South" and "Slings and Arrows."

She's built a career switching from commercial films to theater, but the Samanthas in her career seem to stick more in the popular consciousness than her role in "Three Sisters."

"If you look at my resume, you'll see my theater and film -- they look like two different actors in a lot of ways," she says. "I knew from a very early age that if I wanted to be viable in the theater world, people know who you are if you have film credits."

Richard Eyre, director of "Private Lives" who has "Mary Poppins" and Indiscretions" on his Broadway credits, has long been hoping to work with Cattrall.

"Quite often people think actors who have celebrity because of a TV career have not proved themselves on the stage. But she was a stage actress before she became a television actress," he says. "It doesn't go away."

After "Private Lives" had a successful run in London, which led to a stint in Toronto and now Broadway, a trans-national trip that has significance for Cattrall, who was born in Britain, grew up in Canada and now lives in New York. "This play is hitting every major stop. It's really quite astounding," she says.

The theater is where Cattrall feels happiest. For one thing, there are fewer Samantha Jones parts, which she now gets offered a lot. "The theater, for me, especially now, is where the best parts are," she says.

But she doesn't want to be preachy about wanting to take different and challenging roles.

"I'm not interested in educating people about me and what I've done and haven't done. They can read it in the Playbill," she says. "What I want for them is, hopefully, to be entertained and have an experience that will possibly have them buy another ticket to a straight play."