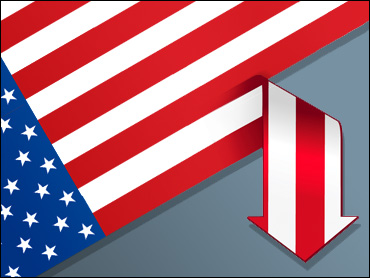 The U.S. economy has been in a recession since December 2007, the National Bureau of Economic Research said Monday.

By one benchmark, a recession occurs whenever the gross domestic product, the total output of goods and services, declines for two consecutive quarters. The GDP turned negative in the July-September quarter of this year, and many economists believe it is falling in the current quarter at an even sharper rate.

But the NBER's dating committee uses broader and more precise measures, including employment data. In a news release, the group said its cycle dating committee held a telephone conference call on Friday and made the determination on when the recession began.

The White House commented on the news that a second downturn has officially begun on President George W. Bush's watch without ever actually using the word "recession," a term the president and his aides have repeatedly avoided. Instead, spokesman Tony Fratto remarked upon the fact that NBER "determines the start and end dates of business cycles."

"What's important is what is being done about it," Fratto said. "The most important things we can do for the economy right now are to return the financial and credit markets to normal, and to continue to make progress in housing, and that's where we'll continue to focus."

The Bush administration won approval from Congress on Oct. 3 for a $700 billion rescue package for the financial system. Bush said in an interview with ABC's "World News" to be aired Monday that he would support additional intervention if necessary to end the recession.

"I'm sorry it's happening, of course," Bush said, referring to a global financial crisis that has eliminated millions of jobs and damaged retirement accounts.

Federal Reserve Chairman Ben Bernanke said Monday that further interest rate cuts were possible but he cautioned that there were limits to how much such action will be able to revive an economy expected to remain weak well into next year.

"Although further reductions ... are certainly feasible, at this point the scope for using conventional interest rate policies to support the economy is obviously limited," Bernanke said in a speech to business executives in Austin, Texas. The Fed is widely expected to cut a key interest rate when officials next meet on Dec. 15-16.

Treasury Secretary Henry Paulson also was scheduled to give a speech Monday providing an update on how the government's rescue efforts are working to deal with the economic distress.

Two new reports provided a grim snapshot of how steep the economic slump is becoming. The Commerce Department reported Monday that construction spending fell by a larger-than-expected 1.2 percent in October, while the Institute for Supply Management said its gauge of manufacturing activity dropped to a 26-year low in November.

The GDP contracted by 0.2 percent at an annual rate in the fourth quarter of 2007, but that that drop was followed growth in the first two quarters of this year, partially boosted by the distribution of millions of economic stimulus payments.

However, employment, one of the measurements tracked by the NBER, has been falling since January.

The NBER decision means that the economic expansion lasted from November 2001 until December 2007. Economic expansions peak and recessions begin in the same month, according to the NBER's dating methods. Founded in 1920, the NBER has more than 1,000 university professors and researchers who act as bureau associates, studying how the economy works.

The decision on the recession means that during the eight years that Bush has been in office, the country has seen two recessions. The first downturn lasted from March 2001 until November of that year.