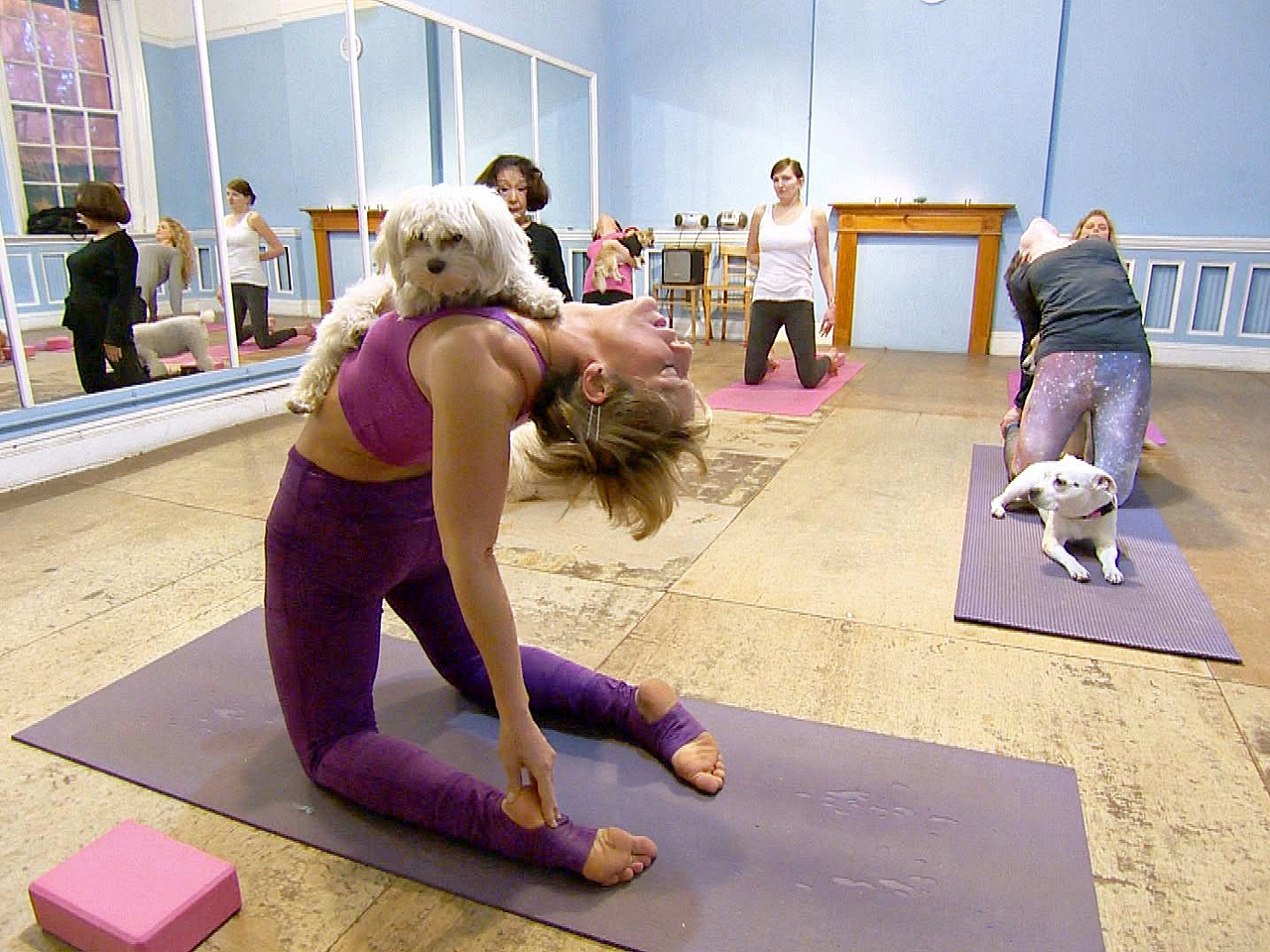 LONDON -- Sitting shins down and knees forward on a yoga mat, Yuko Aoyama stretches her arms toward the ground in front oef her and pulls her French poodle "Poppy" closer to her face - then exhales.  Yuko and Poppy are sharing th mat in a modified yoga fitness class called "doga." It is a series of bi-species yoga meditations, stretches, poses, and massage, sold as providing pets and their owners opportunity to bond in a Zen-like space.

"Poppy thinks she is human and doga is relaxing for me as well as my puppy," says Aoyama, who admits her eight-year old poodle has spent more time in her arms than around other canines. "At doga, she's still by my side - and she can learn to socialize with other dogs."

On the second floor of a west London dance studio, Aoyama is one of a half-dozen women and their dogs following a "dogi," or yoga master, Mahny Djahanguiri. An energetic half-British, half-Persian woman brought up in Switzerland, Djahanguiri has a background in working with traumatized children and is a trained yoga instructor. She calmly and repetitively goes through the motions of modified yoga breathing exercises and moves. The humans repeat the mantras and take deep breaths. The dogs, ranging from poodle to collie and terrier-mix breeds, are rambunctious at first - yipping and barking at each other - but eventually settle down to join their owners at the mats.

"Doga is a human yoga class with your dog, not doggy yoga," says Djahanguiri, to criticism that doga is a fitness gimmick. "The people are getting their human yoga, while the dog feeds off their calm. The dog benefit is relaxation - I always say, doggy Nirvana."

Djahanguiri doesn't take canine-friendly adaptations of popular yoga poses too seriously. For example, the "tree pose" - where one draws the heel of one foot up to the inner side of the knee of the other leg, while stretching one's arms up to the ceiling: in doga, participants hold their pets in their arms in front of or above them, while balancing on one foot. If the dog isn't into it, then leave it alone and concentrate on yourself, she advises.

"When the owner is not aware and has no expectations, is completely calm, is centered and listening to their breathing - and the dog is just there, then you lift the dog up and that's the doga moment," she said.

Some doga critics say some of the series of poses could more easily be done with kettle weights, light dumbbells or strength bands instead of dogs. Djahanguiri bristles. "You are connecting with something you love - and that living, breathing dumbbell loves you too," she says.

Djahanguiri says she started teaching doga in London last year, and that her classes have grown in popularity through word of mouth - and the inclusion of a doga class scene in a popular English television drama. She says most doga enthusiasts are working women with traditional 9-to-5 jobs who feel guilty about leaving their dog at home while they are at work. "They just want to give something back to their dog," she says.

Doga class attendee Petrina Cutchey says that pet dogs are living in the moment, and when the owner is calm, the dog is calm too. "When you get a good, nice, calm dog with good, happy emotions, they'll also be quite well-behaved," Cutchey says.

Relaxed, yes. Perhaps even too relaxed. There were more than a few pellets and puddles on the studio floor by the time the doga class was done.