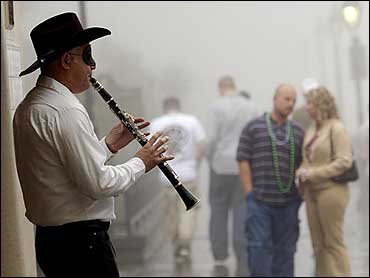 Until midnight, the revelry is full steam ahead, reports Dave Cohen of CBS radio affiliate WWL-AM. Millions of people across Louisiana attend parades that last all day. That's mostly for families, but in the French Quarter Tuesday, it was heavy drinking and rampant nudity.

"I'd rather not talk about it," laughed a woman.

"I think it's a great day, a good day in New Orleans," declared a male reveler.

"It's cool, I love it. It's awesome," declared another.

Parade organizers and businesses dependent on the usual influx of more than a million locals and tourists held out hope that the flooding and rains would not keep partiers from enjoying themselves and spending money.

The 112-year-old "Proteus" parade was canceled, but others went ahead as planned. Some spectators chose to watch parades from the comfort of restaurants and bars to avoid the damp weather.

Gaynell Pervel was among them. She watched a parade headed by singer Harry Connick Jr. pass by outside while enjoying turtle soup, gumbo and a seafood platter.

But for her, being indoors wasn't as much fun. "You don't have the intimacy, the excitement. You're not a participant," Pervel said.

Crowds milled among the bars, restaurants, hotels and strip joints on Bourbon Street, and throngs gathered to catch strings of beads tossed from wrought-iron balconies, even as steady winds blew sheets of rain.

Mary Johnson, visiting from Culver, Oregon, said the weather was "no problem."

Still, Walter Viksne, bartender at the Ol' Toones Saloon, was disappointed in the take.

"It's been a little slow this year and the tips have been less. They're a little cheap this year," he said.

The annual festival is held before the fasting and penitence of Lent, the period between Ash Wednesday and Easter.

Two people have died this year during Carnival: a woman attending a gala who fell from a 20-foot-high platform Saturday, and another woman hit by a stray bullet last Wednesday.