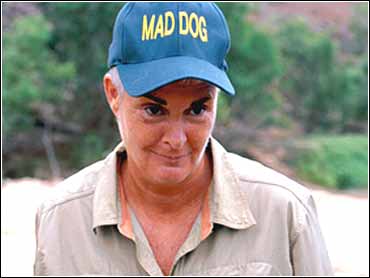 Appearing on CBS' The Early Show Friday was the third tribe member to be kicked off Survivor: The Australian Outback.

Maralyn "Mad Dog" Hershey, the feisty, retired police officer from Washington, D.C., told Jane Clayson that she had no idea that her pal Tina had voted her off the show until she watched the broadcast on Thursday night.

And as a result, she said, "I had to give my own self first aid."

She went on, "Some may view it as poetic justice. The Washington Post portrayed me as shooting Kel in the back about a week ago. So after Tina shot me right between the eyes, I had to give myself a little first aid, but I'm recovering."

When asked if she would still be friends with Tina, Hershey said yes, and offered her reason why.

"It was a g-a-m-e. That's what every single person who played the game and is still playing the game has got to remember once they're no longer playing the game. It was a game. You cannot take what happened to heart."

Hershey admitted to having a "strategy" in playing the game, but allowed that it was "too little, too late."

"I had plans of forming an alliance, but before one could really get going, I think the young crocs, bless them, they got their jaws into me. They had more bite than a 'Mad Dog' bite."

Hershey also talked about the food-fest wheel. Eating the mangrove worm was "really gross. I knew I was going to be dead meat if I bit into the thing. I was going to lose it," she said.

For those who didn't see the broadcast - Hershey took out her teeth and swallowed the worm. She confided to Clayson, "It's really wonderful to be remembered for taking my teeth out. Some things, I guess, are impossible to live down."

Hershey said she thought she was booted out because she was the "O-W-O. Odd woman out" in much the same way that Kel was the odd man out. And she said that voting Kel out last week "bought me a little more time… Not a whole lot more ti,me though."

When asked where she thought her appearance on Survivor would lead her, Hershey replied, "The number one priority of all of this is to survive this, stay yourself and stay grounded. Because what's out there is uncharted waters for me."