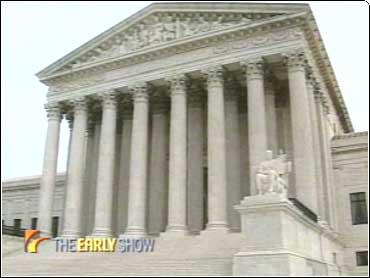 Like many hospitals the Medical University of South Carolina tested women for drug use, but it turned over positive results to police, reports CBS News Correpondent Barry Bagnato.

The Supreme Court is using a lawsuit by women arrested while seeking prenatal care to determine their rights.

The women say the hospital's former policy of testing pregnant women for drug use, and giving police the names of those who tested positive, violated the Constitution's protection against unreasonable searches. A lower court upheld the tests as legitimate efforts by the hospital to reduce crack cocaine use by pregnant women.

The hospital's lawyer, Robert Hood, said that it was medically necessary to protect devloping babies. He said there's "no difference if you saw a woman put a knife to her stomach. You would grab it from her hand and stop her."

But the American Public Health Association calls it unethical. It's not the medical community's job to report to the police or place moral judgement.

After hearing arguments Wednesday, the Supreme Court is expected to decide by July whether such tests conducted without a court warrant violate the Fourth Amendment ban on unreasonable searches.

Ten women filed a lawsuit in 1993 against the Medical University of South Carolina, which four years earlier began testing pregnant women for cocaine and giving any positive results to police.

Women found to be using illegal drugs were prosecuted under South Carolina's child-endangerment law. One was arrested at the hospital shortly after giving birth and another woman who had sought prenatal care was arrested and jailed for three weeks until she delivered her child.

Hospital officials contend the women agreed to be tested. The women's lawyers said they consented to hospital treatment but not to delivery of their test results to the police.

In early 1990, the policy was changed to give drug-using patients a choice between being arrested or enrolling for drug treatment. The hospital later dropped the policy, but by then police had arrested 30 maternity patients.

The Supreme Court's ruling in the case could determine whether the policy gets reinstated or whether other hospitals consider adopting similar tactics.

South Carolina's highest court has ruled that the state child-endangerment law protects viable fetuses those able to live outside the womb and therefore pregnant women whose activities endanger their fetuses can be prosecuted.

After a trial, a federal jury ruled against the women, and the 4th U.S. Circuit Court of Appeals agreed in July 1999. The apeals court said the urine tests were "minimally intrusive," and hospital officials had a substantial interest in reducing cocaine use by pregnant women.

For those reasons, the appeals court upheld the tests under an exception to the Fourth Amendment's general requirement that searches must be authorized by court warrant or based on reasonable suspicion that a crime has been committed.