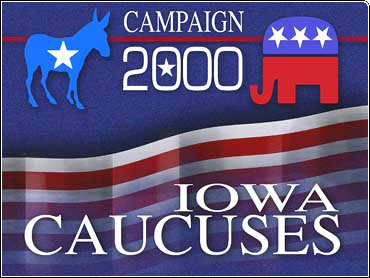 It happens every four years. A relatively small slice of voters in the center of America's heartland gives the nation a first reading of who's ahead in the presidential race.

The glare will be blinding, but fleeting, as the national spotlight turns to Iowa on Jan. 24, considered the opening night of the 2000 presidential campaign.

"I always joke with reporters that you love us now, but in the morning we all fall off the face of the earth -- and we do,'' says Dennis Goldford, chairman of the department of politics and international relations at Drake University.

But for one night at least, Iowa will be the nexus of the earth for presidential politics. About 180,000 people -- 10 percent of Iowa's 1.8 million registered voters -- are expected to brave the winter chill to make their presidential preferences known.

Democrats and Republicans will gather separately in fire stations, schools, diners and living rooms to elect delegates to the state's 99 county conventions. Democrats voice their opinions through a show of hands, a sign-in sheet or by dividing themselves into groups according to favored candidate; while each of the Republican caucuses holds its own straw vote. The results of the caucuses are nonbinding on the elected delegates.

All Iowans who'll be 18 by the November 2000 elections are eligible to participate, and they can register with the party of their choice on the spot.

Although Iowa has held caucuses for more than a hundred years, they only began to take on national prominence in 1972, when Democrat George McGovern used a strong Iowa performance as a springboard to winning his party's nomination. Then in 1976, a little-known Southern governor named Jimmy Carter jump-started his fledgling campaign with an Iowa victory, and rode the momentum all the way to the White House.

Since then, Iowa has solidified its role as the all-important first stop on the presidential campaign trail. Victory, or at least a strong showing, in the caucuses has become nearly essential to winning a party's nomination, and candidates spend extraordinary amounts of time and money in the state trying to woo caucus-goers.

Stumping for the 2000 campaign began way back in March 1997, shortly after President Clinton began his second term, when Republican Lamar Alexander came courting and courting again, until he dropped out last year.

By the second week of January 2000, presidential aspirants had planted their feet on Iowa soil more than 700 days, the equivalent of two full years, according to Hugh Winebrenner, a Drake University professor and author of The Iowa Precinct Caucuses: The Making of a Media Event.

This is retail politics at its purest, but the chance to get personal with politicians doesn't always wear well with voters.

"They hear so much and each one (candidate) tries to outdo the others so just the word politics is enough to turn people off,'' says Ellie Snook, who will host Democratic caucus at her soda fountain-diner in the tiny town of Montezuma. " How do you believe any of them?''

Despite their skepticism, many Iowans are united on one point: their first-in-the-nation status is a rare chance to shed the state's hayseed image.

"This shows we're not the hicks from the sticks,'' says Snook, the diner owner.

"I think people here really need this,'' says Charlotte Boyett-Compo, a 52-year-old author and church secretary in Grinnell. "They consider themselves the average person in America.''

Iowans tend to be better educated, older and more racially homogeneous than residents of most states. Blacks and Hispanics together make up less than four percent of the state's population.

"If you sit in the town square wearing a pair of bib overalls, your chances of being on ABC or CBS are enhanced greatly,'' Winebrenner says half-jokingly.