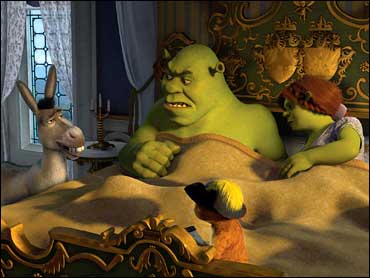 "Shrek the Third" took in $122 million in its first weekend, breaking the franchise's own record for best debut ever for an animated film, according to studio estimates Sunday.

The latest adventure of the ogre shot past 2004's "Shrek 2," the previous record-holder for animated openings with $108 million.

Produced by DreamWorks Animation and distributed by Paramount, "Shrek the Third" was the third-biggest debut ever, coming in behind the $151.1 million haul of this month's "Spider-Man 3" and the $135.6 million gross of last summer's "Pirates of the Caribbean: Dead Man's Chest."

Executives at DreamWorks Animation and Paramount had expected "Shrek the Third" to open more in range with the debut of "Shrek 2."

"The opening was significantly beyond our expectations," said Anne Globe, head of marketing for DreamWorks Animation. "The movie played much more like an all-audience movie. It played broadly to general and family audiences."

"Shrek the Third" also took in $13.3 million in four overseas markets: Russia, Ukraine, Romania and the Philippines. The film rolls out to most major countries between mid-June and early July.

The movie reunites Mike Myers, who provides the voice of the lovably gruff ogre, and co-stars Eddie Murphy, Cameron Diaz and Antonio Banderas. Justin Timberlake joins the cast, providing the voice of the future King Arthur, an awkward teen Shrek grooms to rule the land.

After ruling the box office for two weekends, Sony's "Spider-Man 3" slipped to second place with $28.5 million, raising its domestic total to $281.9 million. Worldwide, "Spider-Man 3" has taken in $747 million.

"Shrek the Third" could have a short reign as the No. 1 movie. On Friday, Disney releases "Pirates of the Caribbean: At World's End," with Johnny Depp returning as woozy buccaneer Jack Sparrow in the franchise's third installment.

Box-office analysts say "At World's End" has a shot at breaking the debut record of "Spider-Man 3," though it faces stiff competition from the Spidey sequel and "Shrek the Third." "At World's End" also runs nearly three hours, limiting the number of screenings theaters can fit in each day.

"The third film of this massive triumvirate is on the way. Given the strength of `Spider-Man 3' and `Shrek the Third,' anticipation is running extremely high for `Pirates 3,"' said Paul Dergarabedian, president of box-office tracker Media By Numbers. "Both `Spider-Man' and `Shrek' exceeded expectations, so who knows with `Pirates'? The marketplace is just exploding right now."

In limited release, Fox Searchlight's Irish music romance "Once" debuted strongly with $60,511 in two theaters in New York City and Los Angeles. The low-budget film stars Glen Hansard of the rock group the Frames as a Dublin street musician who falls for a Czech immigrant and collaborates with her to write and record songs.

A critical favorite that came out of last January's Sundance Film Festival, "Once" expands to 11 more cities Friday.